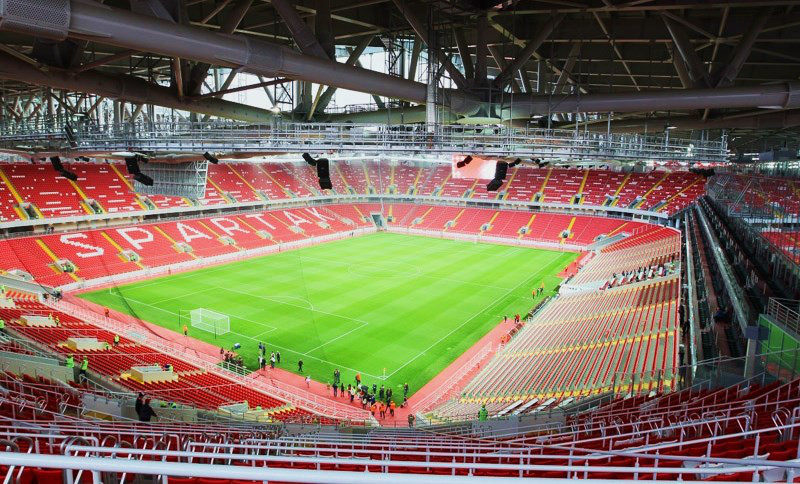 The Otkritie Arena is the recently opened new home of Spartak Moscow. In its history, Spartak had never owned a proper stadium, using various stadiums around Moscow instead, and ultimately playing at Luzhniki Stadium.

The club had been looking to build a new stadium from as early as the mid 1990s, but early plans failed to materialise. The project of the Otkritie Arena became concrete in 2005 after the club acquired a site at the Tushino Airfield grounds in the far north-west of Moscow.

Few progress was made in the following years, however the financial crisis in 2008 led to significantly reduced construction costs, which in turn made getting funding easier. Construction of the stadium finally started in July 2010.

Initial plans went for a stadium with about 35,000 seats, but this was later revised upwards to 42,000 with an eye on the 2018 World Cup. The Otkritie Arena got subsequently confirmed as the second Moscow playing venue besides Luzhniki Stadium, beating Dynamo’s VTB Arena for the spot.

In February 2013, Spartak announced a naming rights deal with local bank Otkritie, resulting in the name Otkritie Arena. The stadium officially opened on 5 September 2014 with a friendly between Spartak and Red Star (1-1).

The Otkritie Arena was selected as one of the playing venues of the 2017 Confederations Cup, hosting three first round group matches and the match for third place.

How to get to the Okritie Arena

The Otkritie Arena is located in the north-west of Moscow, just within the Moscow Ring Road (MKAD), at about 14 kilometres from Moscow’s city centre.

The stadium can be easily reached by metro. Newly constructed station Spartak is on the purple Tagansko-Krasnopresnenskaya line (line 7), which runs through Moscow’s centre.

Eat, drink, and sleep near the Otkritie Arena

The Otkritie Arena is located on the site of a former airfield in a Moscow suburb mainly comprised of residential buildings. There is little around in terms of eating and drinking apart from a McDonald’s outlet a short walk away.

There is little choice of hotels near the Otkritie Arena, with the cheap and basic Mini Hostel and somewhat more expensive Hotel Tayozhny among the limited options. Since the stadium is easily reached by metro, finding a hotel elsewhere with easy connection might be a better alternative. Click here for an overview of hotels in Moscow.

Tickets for Spartak matches can be bought online, by phone +7 8 495 777 42 00 or at the ticket windows of the Otkritie Arena from a few days before the match as well the day of the match.

Ticket prices may depend on the opponent, but expect to pay between RUB 700 for a seat behind the goal and RUB 2,200 for an upper-tier seat at the long side for a regular league match.

Photos of the Otkritie Arena