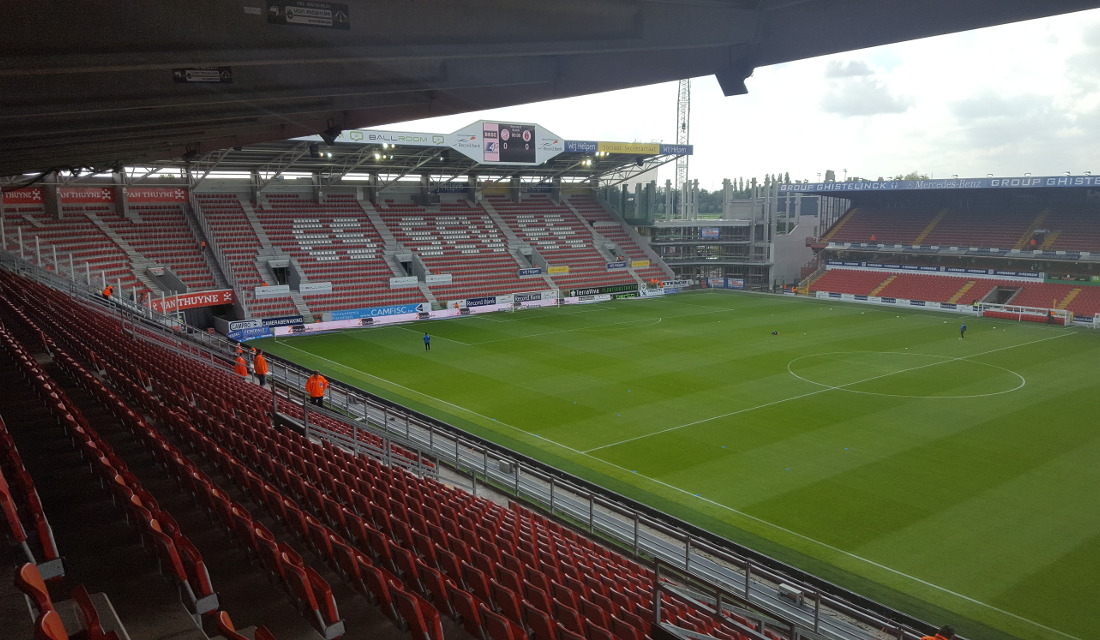 Regenboogstadion got built to host the 1957 Cycling Road World Championships. The stadium received its name because the reward of the Road Race gold medal winner is a rainbow (“regenboog”) jersey.

The stadium was therefore initially oval-shaped, with a cycling track that later turned into an athletics track, and one small seater stand.

In the next decades, two new seater stands got built on both sides, with small terraces remaining behind both goals. However, by the 2000s the stadium had severely aged and plans got made to extensively redevelop the stadium.

First plans were presented in 2008, however it took until 2014 for actual works to start. The eventual plans called for a gradual redevelopment of all stands resulting in an enclosed bowl with just over 13,000 places.

The next stages will involve a renovation of the 1990s seater stand opposite the main stand, and finally the reconstruction of the main stand. However, the concrete timeline has not been confirmed yet.

How to get to Regenboogstadion

Regenboogstadion is located on the southern edge of Waregem’s town centre. It lies a 5-minute walk away from the Markt, Waregem’s central town square.

Waregem’s railway station is located a little further north, a 15-minute walk from the stadium. Frequent direct trains, usually twice an hour, connect Waregem with Ghent in the north and Kortrijk in the south. There are also direct trains continuing past Ghent to Antwerp, which run about once an hour.

Eat, drink, and sleep near Regenboogstadion

Regenboogstadion is located on the edge of the centre of the sleepy town of Waregem. It is bordered by a pleasant park with large pond, and there are a few bars and restaurants in the town centre, particularly on the Markt square and Stationsstraat, but overall it is an uneventful town.

There are few hotels in Waregem, in fact, Hotel Ambassade is the only real option in Waregem’s town centre at walking distance from the stadium. There are a few more options outside of town which could be an option if travelling by car.

Click here for an overview of hotels in Waregem. Most people, however, will decide to stay in nearby Ghent, or possibly Kortrijk, which is a short train journey away and somewhat more lively than Waregem.

Tickets for Zulte Waregem games can be bought online, or at the ticket windows of the stadium on the day of the match.

Zulte Waregem will only sell out the odd high-profile match.