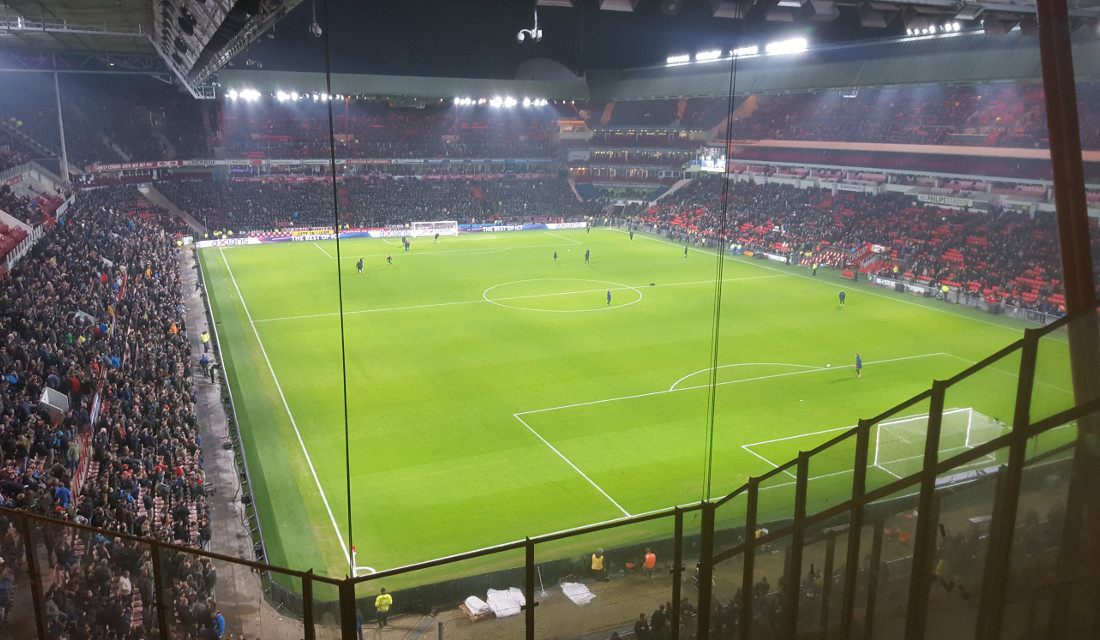 Philips Stadion has been the home of PSV Eindhoven since the club’s foundation in 1913. It officially opened on 13 August 1913 with a kick-off by the 8-year-old Frits Philips, son of Philips Electronics founder Anton Philips and future livelong PSV fan.

Philips Stadion was initially a bare pitch and it took until 1916 for the first wooden stand to be built. In the following decades, the stadium got gradually expanded, resulting in a capacity of about 22,000 in the post-War period.

The stadium got almost entirely rebuilt between 1969 and 1977, which resulted in a completely enclosed and covered stadium with a capacity of 26,500 places.

The new main stand was the last to be completed in 1977, but also the first to get rebuilt again when in 1988 cracks in the concrete were found. The new two-tiered main stand had ample corporate facilities and was considered to be the most modern of the Netherlands at that time.

In the next six years, works continued with the reconstruction of the two stands at the ends, and finally with the other side of the stadium.

Philips Stadion got selected as one of the playing venues of the Euro 2000 tournament, during which it hosted three first round group matches.

The stadium counted with a capacity of just over 30,000 at that time, which later got increased when the upper tiers on the southern side got linked up.

In 2006, Philips Stadion hosted the UEFA Cup final between Sevilla and Middlesbrough (4-0).

How to get to Philips Stadion

Philips Stadion is located on the edge of Eindhoven’s city centre, which means it is only a 5 to 10-minute walk from Eindhoven’s main shopping areas and central train station.

Exit the train station on the city centre side, turn right, and follow the avenue until the stadium shows up in front of you.

If arriving by car, find your way to Eindhoven’s city centre. Most city centre car parks are within walking distance of the stadium.

If coming from Eindhoven Airport, take bus 401 to the central train station and get off at stop Philips Stadion. The ride takes about 20 minutes.

The central location of the Philips Stadion makes that there are plenty of bars and restaurants at short walking distance in Eindhoven’s city centre.

Eindhoven’s nightlife area around Stratumseind is located on the southern edge of the centre at a 15-minute walk from the stadium. More bars and restaurants can be found around the Kleine Berg, Markt, or central station area, all even closer to the stadium.

Similarly, you can pick any of the hotels in Eindhoven’s centre as these are all at walking distance of the stadium. Click here for an overview of hotels close to the Philips Stadion.

Tickets for PSV matches can be bought online, or at the FANworld PSV shop at the stadium.

For most matches PSV require possession of a PSV club card to be able to buy tickets so make sure to check club card requirements on the official PSV website.

PSV typically sell out a quarter of all home matches per season. If tickets remain available on the day of the match, these can also be bought on the gate from two hours before kick-off, though the same club card requirements apply.

PSV offer special matchday packages for foreigners, that include a match ticket, gift voucher for the PSV shop, and a food or drink gift voucher for in the stadium, but are more expensive than a regular ticket. Bookings can be made by emailing ticketoffice@psv.nl.

Tours run once or twice times a day, usually around 1:00-2:00pm. Check the official website (English) for current run times and bookings.