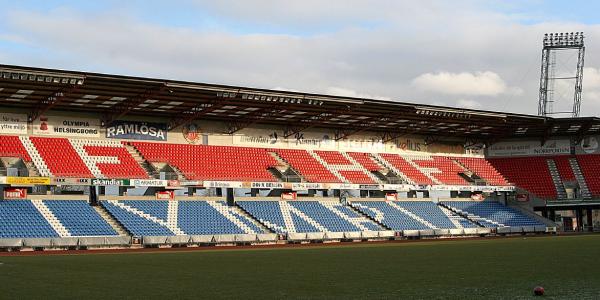 First plans for the construction of a stadium in the city of Helsingborg arose by the end of the 19th century. The stadium was planned to be a multi-sports venue aimed at athletics, cycling and ice skating, but after the foundation turned out to be unsuitable to hold water for the ice skating rink, a football pitch was installed instead.

Olympia officially opened on the 31st of July 1898 with a series of sports events, though the planned football match had to be postponed due to the darkness setting in. The stadium was initially named Idrott, but when that name turned out to have already been registered, instead was chosen for Olympia in the spirit of the first modern Olympics.

After Helsingborgs IF had been formed in 1907, the club moved directly into Olympia. In the next decade the stadium got gradually upgraded and additional terraces were built in the summer of 1924.

A new main stand was built in 1951, and a few years later, in 1954, Olympia recorded its highest attendance when 26,154 people showed up for the local derby with Malmö FF.

Further improvements to the stadium were made in preparation for the 1958 World Cup, during which it hosted two group matches.

Few changes were made in the following decades until in 1985 the athletics tracks got removed and three new concrete stands were built. Seven years later, in 1992, the stadium opened a new main stand.

The final change to the stadium came in 1997 with the construction of a new East Stand. Tentative plans have been made in recent years to rebuilt both terraces at the short ends, but so far none have materialised.

By car, from the south (E6), take exit 28 toward the E4 Helsingborg and follow the E4 into the city. At the roundabout follow for Olympia (first exit), and from there on keep straight ahead until you see the stadium on the right side of the road.

From the north or east (E6 or E4), take the E4 into the city. Continue straight on where the motorway ends and turn left following for Olympia. Follow the road until you see the stadium on the left side of the road.

Tickets for Helsingborgs IF games can be bought online via Ticnet, by phone +47 776 70 77 77 (Ticnet), at the club shop at the stadium, or at the gates of the stadium on the day of the match. Helsingborgs will only sell out the occasional high-profile match.

Helsingborgs has divided its home games into two pricing categories. A standing place for the cheapest category costs SEK 120.00, and a seat either SEK 240.00 or SEK 300.00.

Prices for the more expensive matches are increased to SEK 160.00 for a standing place and either SEK 260.00 or 340.00 for a seat. Prices are further increased for the derby with Malmö FF.

It is generally a lot cheaper to buy tickets in pre-sale than on the day of the match. For more information email biljett@hif.se or call +47 042 37 70 00.