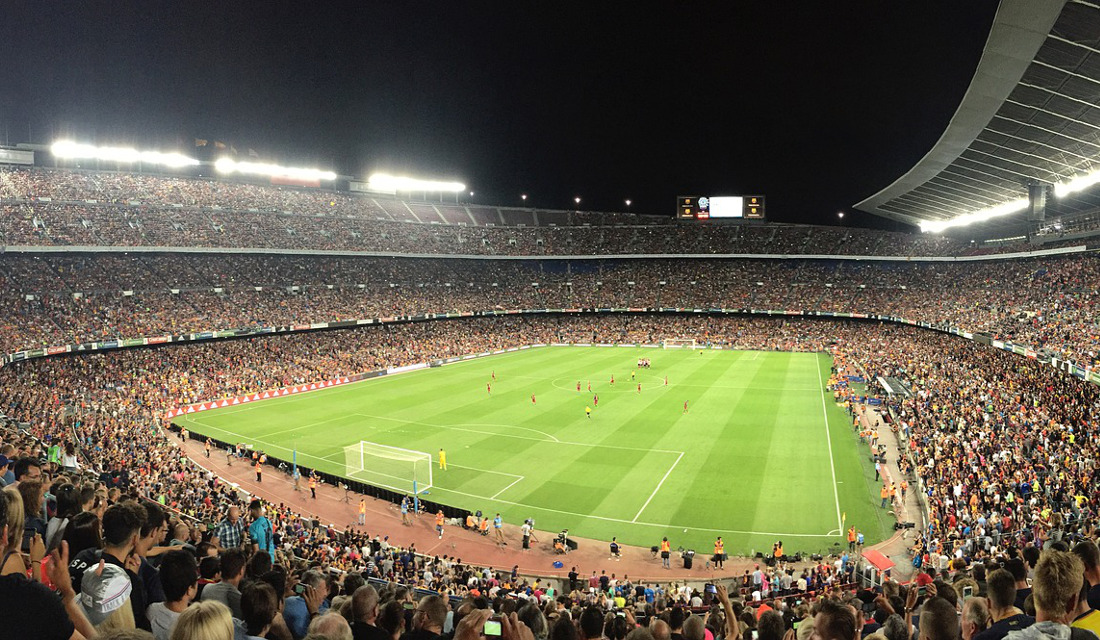 Camp Nou was built between 1954 and 1957, and officially opened on the 24th of September 1957 with a match between FC Barcelona and a selection of players from the city of Warsaw.

The stadium replaced Barcelona’s previous ground Camp de les Corts, which, though it could hold 60,000 supporters, was still too small for the growing support of the club.

Camp Nou initially consisted of two tiers that could hold 93,000 spectators. It was first called Estadi del FC Barcelona, but got soon referred to as Camp Nou.

The stadium was, together with Estadio Santiago Bernabeu, playing venue of the Euro 1964 Championships. It hosted the semi-final between the Soviet Union and Denmark (3-0), and the match for third place between Hungary and the same Denmark (3-1).

The stadium hosted two Cup Winners’ Cup finals in the following decades, the first in 1972 between Glasgow Rangers and Dynamo Moscow (3-2), and the second in 1982 between Barcelona and Standard de Liège (2-1).

Camp Nou got expanded with a third tier for the 1982 World Cup, which raised capacity to 120,000 places. During the World Cup, it hosted the opening match between Belgium and Argentina (1-0), three matches in the second group stage, and the semi-final between Italy and Poland (2-0).

In 1989, Camp Nou hosted the European Cup final between AC Milan and FC Steaua (4-0), which was followed in 1999 by the Champions League final between Manchester United and FC Bayern (2-1).

In the early 1990s, Barcelona started converting various standing areas into seating, which reduced capacity, though additional seats were created by lowering the pitch.

Until the late 1990s, Camp Nou still had some standing areas at the top of the third tier, but these were finally eliminated, reducing capacity to just below 100,000.

In contrast to the Bernabéu, Camp Nou has changed relatively little since its inauguration and lacks many of the modern facilities common in most stadiums these days. For the last decade, Barcelona have therefore been investigating either redeveloping Camp Nou, or even building a completely new stadium.

In the mid 2000s, the club presented plans for a renovated Camp Nou, designed by Norman Foster, but a lack of funding prevented realisation. The club next started studying a move to a new stadium, but finally decided in 2014 to redevelop the current stadium.

The redevelopment will entail the reconstruction of the first tier resulting in a steeper tier with better views, the extension of the top tier over the whole of the stadium, the construction of a roof to cover all seats, and expansions and improvements to the interior of the stadium aimed at providing better facilities. The resulting capacity will be slightly higher at a little over 105,000 seats. Works are planned to start in 2017 and gradually performed over four seasons to finish in 2021.

(photos of the present Camp Nou below)

How to get to Camp Nou

Camp Nou is located in the east of Barcelona, at about 5 kilometres from Barcelona’s historic city centre. The stadium is part of a sports complex that also includes Barcelona’s Mini Estadi.

The stadium is easy to reach by metro. Various stations lie close to the stadium and from all of them it takes an approximate 10-minute walk to reach the stadium.

From Barcelona’s city centre one can take metro line 3. Take the metro in the direction of Zona Universitària and get off at station Les Corts. The next two stations, Maria Cristina and Palau Reial, are equal alternatives. The journey from the centre takes about 25 minutes.

If coming from the area around the Sagrada Familia, one can take metro line 5. Take the metro in the direction of Cornellà Centre and get off at station Badal or Collblanc.

If coming from the A-2 (west), take the B-23 into the city, which will automatically flow into the Avenida Diagonal.

Camp Nou is situated in a rather dense urban area (especially toward the east and south), and one can therefore find the typical local Spanish bars and restaurants in the vicinity of the stadium.

The options pale, however, in comparison with what can be found in the centre, which is a short metro ride away. Most eating and drinking in Barcelona is centered in the historic centre (Gothic Quarter, El Born, and Raval), and there is more nightlife in the nearby beach and port areas.

There is a wide selection of hotels, hostels, and rental apartments in the area around Camp Nou. Most are the typical tourist hotels and reasonably affordable.

Hotel NH Rallye overlooks the stadium and gets good reviews. Hotel Madanis and Hotel Madanis Liceo come in a similar price category of between €60.00 and €80.00 per night. Hotel Catalonia Rigoletto and Princesa Sofia Gran Hotel are more luxuruous alternatives, whereas Hotel L’Alguer is somewhat more basic, and hence cheaper.

Click here for an overview of hotels near Camp Nou. There are also many hotels near Plaça d’Espanya, which is on both metro lines 3 and 5, and of course in Barcelona’s historic centre.

Tickets for Barcelona games can be bought online, through the official website or Ticketmaster, at the ticket windows (taquillas) of Camp Nou, or through any of the other sales outlets, which include the local tourist offices and club stores. There are club stores on the Carrer de Provença 439 near the Sagrada Familia, on Plaça de Catalunya, and Maremagnum shopping centre in Barcelona’s city centre.

If tickets remain, these can be bought at the ticket windows of the stadium on the day of the match (near gate 9). Barcelona sell out very few games per season, typically only El Clasico and high-profile Champions League matches.

Tickets for El Clasico can only be bought by club members, and to get these you therefore need to search on the secondary market or use one of the many licensed agencies. The likes of viagogo and Ticketbis offer lots of choice and tend to be reliable, though needless to say that prices are high. Their prices for regular matches tend to be more competitive though, and can even be cheaper than face value so offer an alternative for the official route.

Prices will be even higher for some games, including, El Clasico and later stage Champions League games, and can be lower for a few low-profile games and Copa del Rey games.

Barcelona offer self-guided stadium tours, called the Camp Nou Experience, which include a walk through the stadium with audio guide and access to the Barcelona museum. Private guides are available against additional payment. The Camp Nou Experience typically takes between 90 and 120 minutes.

There are no tours on the day of a match and there is limited access the day before a Champions League match. The tour costs €24.50, which includes the museum.