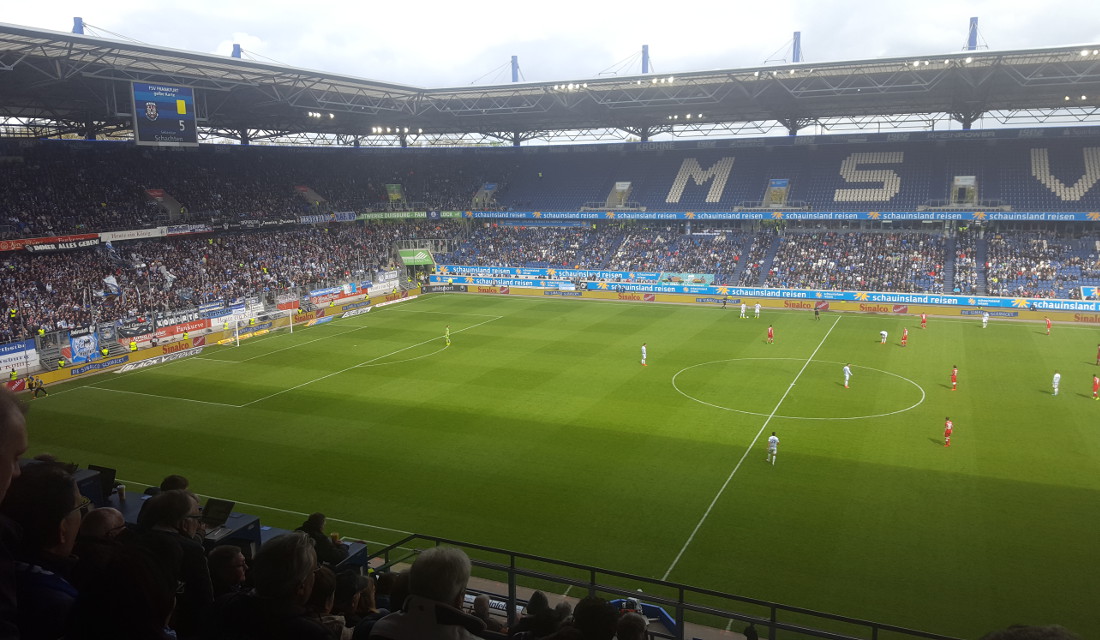 The Schauinsland-Reisen-Arena replaced Duisburg’s old Wedaustadion. Plans for the construction of the new arena were presented in 2002, and demolition of the old stadium started in May 2003.

Works on the new stadium began late 2003, and in April 2004 the first two new stands had been finished. The third new stand opened in August 2004, and six months later the stadium was completed with the opening of the new main stand.

The first match at the completed stadium was played on 8 November 2004. The fixture between Duisburg and Alemannia Aachen ended in a 1-0 victory for the home side.

The stadium was initially called MSV-Arena, but changed names in 2010 to Schauinsland-Reisen-Arena as the result of a sponsorship deal.

How to get to the Schauinsland-Reisen-Arena

The Schauinsland-Reisen-Arena is located in the south of Duisburg at just over 3 kilometres from the city centre and main railway station.

The stadium lies just east of the A59 motorway. Take exit 13 Wanheimerort/Wedau, and turn east underneath the railroad tracks following for Sportpark Wedau. The parking of the stadium lies right in front of you at the end of the Wacholderstraße.

If coming from the A3 (which runs further toward the east), take exit 15 Duisburg-Wedau, and follow the signs for Sportpark.

Commuter train (S-Bahn) station DU-Schlenk lies a 10-minute walk away from the stadium. Take S-bahn line 1 from Duisburg’s main rail station (or from other cities in the area such as Dortmund, Bochum, or Dusseldorf). DU-Schlenk is the next station from Duisburg Hbf in the direction of Düsseldorf. Trains run once every half an hour.

An alternative is metro / city rail (U-Bahn) U79, which you can take from the main railway station or several city centre stops. Get the train in the direction of Düsseldorf, and get off at stop Grünewald, from where it is a 10-minute walk to the stadium.

Bus 923 and 934 stop right in front of the stadium. Both buses can be taken from Duisburg’s main railway station. Get off at stop MSV-Arena.

Tickets for MSV Duisburg games can be bought online, by phone +49 (0) 1805 190203, at the club shop at the Schauinsland-Reisen-Arena, or at any of the other sales points.

Of these sales points, the Tourist Information at the Königstraße 86 and the Theaterkasse Lange at the Kuhstraße 14 are both located in Duisburg’s city centre.