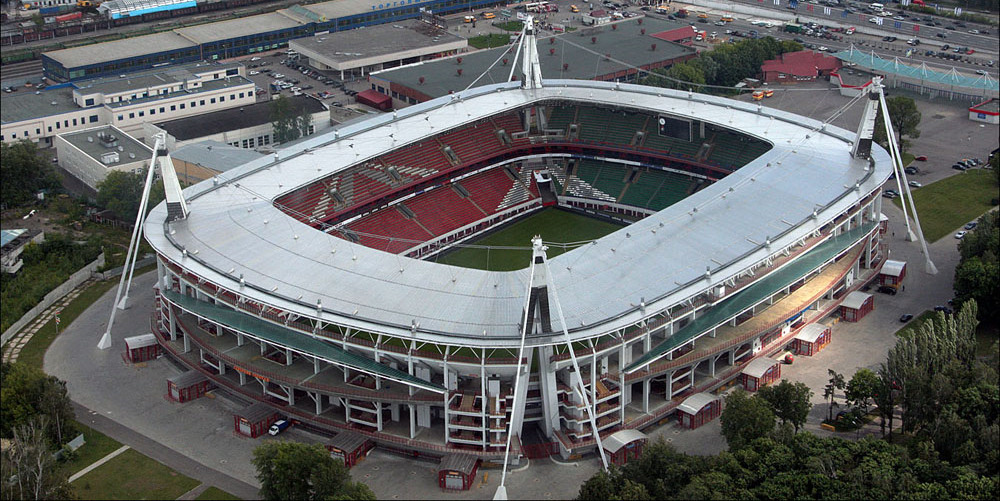 RZD Arena, previously known as Lokomotiv Stadium, was built between 2000 and 2002, and opened on 5 July 2002 with a match between Lokomotiv and Ural.

The roof of the stadium is held up by four concrete pylons. The stadium holds 60 VIP boxes, each having between 10 and 20 seats.

Lokomotiv Stadium has been regularly used by other Russian sides needing a temporary home such as Anzhi in the Europa League and Spartak Moscow for the 2013-14 season while waiting for the completion of the Otkritie Arena.

How to get to RZD Arena

RZD Arena is located in the north-east of the city of Moscow, between Moscow’s third ring road and the MKAD ring road at about 9 kilometres from Moscow’s city centre.

The stadium can be reached with metro line 1 (the red line). It is an approximate 20-minute ride from stations Biblioteka or Okhotnyy Ryad in Moscow’s centre. Get off at station Cherkizovskaya, which lies right next to the stadium.

RZD Arena is located on the outskirts of Moscow in a mainly residential area mixed up with some light industry. There is some small retail around where you may be able to get something to eat, but in general it is wiser to eat and drink in central Moscow.

There is a pocket of hotels not far south of the stadium near Izmailovsky Park, from where you can walk in 15 to 20 minutes to the stadium. They are near Partizanskaya metro station, which provides quick access to central Moscow.

The Izmailovo complex offers different hotels with different prices, though in most cases very affordable. These include the Izmailovo Beta Hotel, Izmailovo Gamma Hotel, and Izmailovo Alpha Hotel. The Best Western Vega Hotel is another option.

Click here for all hotels near the RZD Arena, and here for an overview of hotels in central Moscow.

Tickets for Lokomotiv games can be bought online, or at the ticket office at the RZD Arena. Lokomotiv sell out very few matches.

Lokomotiv have divided their home matches into two pricing categories. Ticket prices for the cheapest category start at RUB 250 for a seat behind the goal and range up to RUB 800 for a central seat at the main stand. Prices are increased for high-profile matches to between RUB 500 and RUB 1,200.