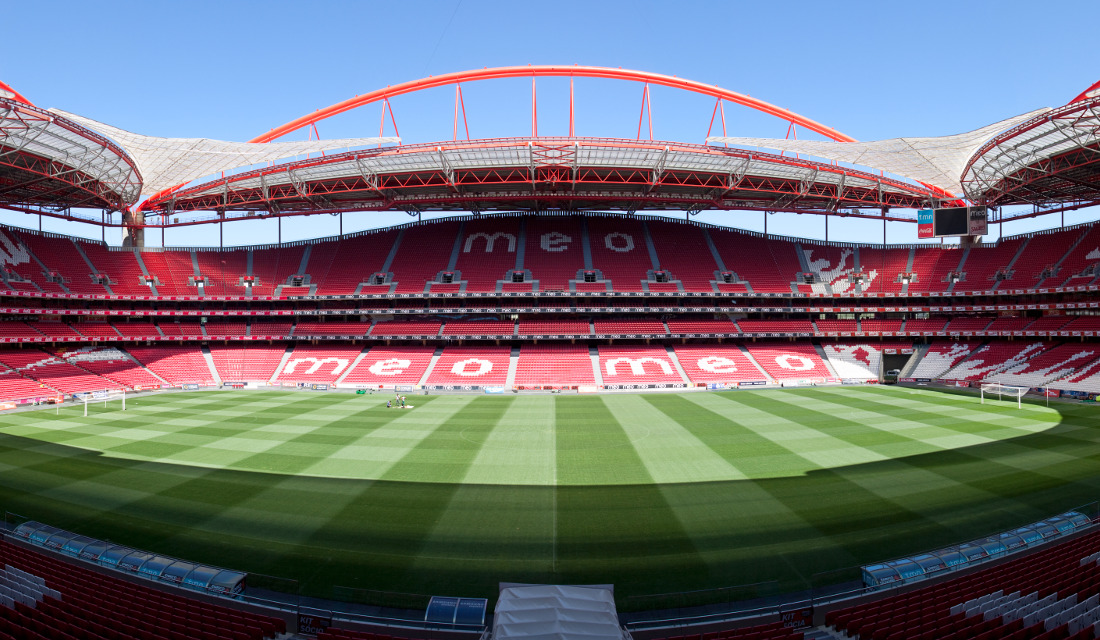 Estádio da Luz, officially named Estádio do Sport Lisboa e Benfica, was built to provide Benfica with a new and modern home, and to serve as the playing venue for the Euro 2004 final.

Estádio da Luz got built in place of the old Estádio da Luz. Construction works started in 2002, and in March 2003 Benfica played their last game at the partly demolished old stadium.

The new stadium opened on 25 October 2003 with a match between Benfica and Uruguayan side Club Nacional (2-1).

During the Euro 2004 Championships, Estadio da Luz hosted three group matches, the quarter-final between Portugal and England (2-2), and the final between Greece and Portugal (1-0).

How to get to Estadio da Luz

Estadio da Luz is located in the north of Lisbon at almost 8 kilometres north of Lisbon’s city centre and not far away from Lisbon’s other major stadium, Estádio José Alvalade.

The stadium lies adjacent to the E1 (Av. General Norton de Matos) motorway. Take the exit toward Benfica. The stadium is clearly visible from the motorway and signposted coming from the east.

If using public transport, Estádio da Luz can be reached with the blue metro line. The blue line can be boarded at several stations in Lisbon’s city centre, e.g. at Baixa-Chiado. Get off at station Colégio Militar/Luz, which lies right next to the stadium.

Estádio de Luz is surrounded by motorways and apartment blocks, and the area is not particularly suited for walking around. There is therefore little reason to head to the stadium too much in advance and eating and drinking is best done in Lisbon’s lively city centre.

However, if you do find yourself at the stadium with some time to spare, then you can head to large shopping centre Colombo right across the Av. General Norton de Matos, where you can find a decent selection of restaurants of various cuisines, a few coffee shops, some bars, and a cinema.

There are no hotels in the immediate vicinity of Estádio da Luz, but if you wish to stay as close as possible, you could pick one of various hotels near the Praça Espanha, which is just at walking distance, but also on the blue metro line. Hotels in the area include the typical chain hotels such as an Ibis, Mercure, Novotel, and the Portuguese chain SANA Hotels. These all get good reviews and are very reasonably priced around €60.00 to €70.00 per night. The Lisbon Marriott and Corinthia Hotel are more expensive alternatives.

Click here for an overview of all hotels near Estádio da Luz. Of course, if you have more than a day to spare, staying in the city centre will likely be more convenient. Click here to explore the options in central Lisbon.

Tickets for Benfica games can be purchased online, or at the ticket office at the stadium.

Tickets can also be bought on the day of the match at the gates of the stadium. Apart from the odd match against Sporting or Porto, Benfica does not tend to sell out.

Ticket prices typically range from €20.00 for a seat behind the goal to €60.00 for a middle-tier seat at one of the long sides.

Benfica organise guided stadium tours around Estádio da Luz that include access to the VIP areas, players tunnel, dugouts, and the away team dressing rooms. The stadium also houses the Benfica museum.

Tickets can be bought at the club store at the stadium or by emailing visitasestadio@slbenfica.pt.