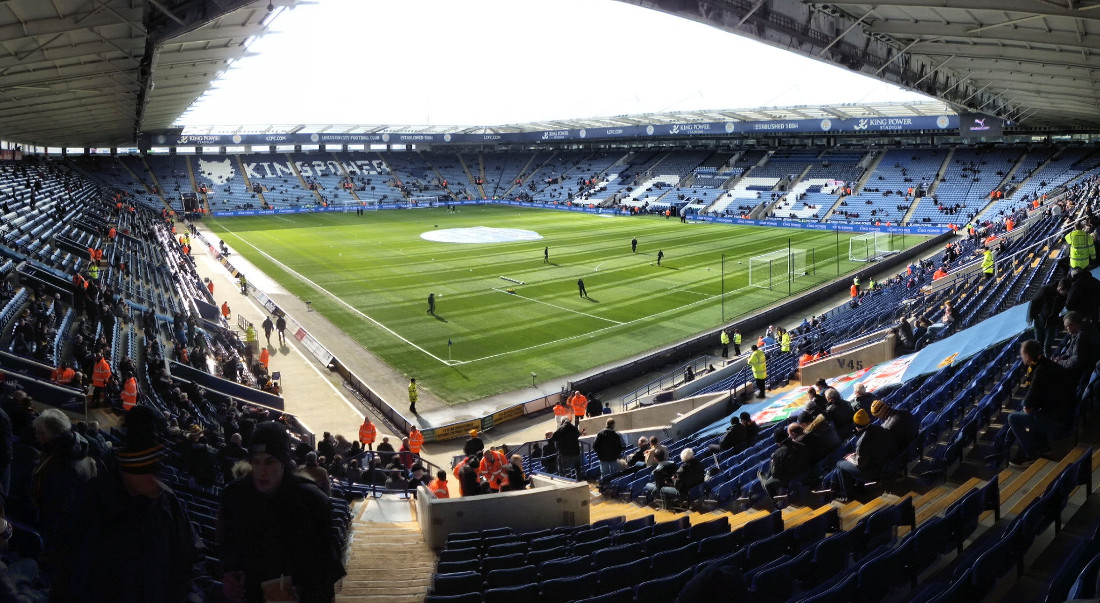 Leicester City first presented plans to replace the aged Filbert Street ground in the mid 1990s, but it took until 2000 for the final plans to get unveiled. Construction of the new stadium started in 2001 and works finished in time for the start of the 2002-03 season.

The King Power Stadium, then still called Walkers Stadium, officially opened on 23 July 2002. The first match at the stadium, a friendly between Leicester and Athletic Club de Bilbao (1-1), was played twelve days later.

In 2011, the stadium got renamed King Power Stadium after the company of the club’s new Thai owners.

How to get to the King Power Stadium

The King Power Stadium is located slightly more than 1 mile south of Leicester’s city centre and main rail station. The walk should not take more than half an hour. On the way you’ll pass the stadium of Rugby club Leicester Tigers.

Alternatively, Arrivabus 84, 84A and 85, Centrebus 302, or First Bus 88 connect the stadium with the city centre and rail station.

If arriving by car from either the M1 or M69, exit at junction 21 (where the M1 and M69 intersect). Follow the signs for the city centre via the A5460. After almost 3 miles turn right onto Upperton Road. From Upporton Road signs will guide you to the stadium.

King Power Stadium is located on a retail park bordered by a residential area. While there is the odd pub around, it is not the most attractive area and most will drink in the city centre or nearer to the station.

If you wish to stay overnight close to the King Power Stadium, the Holiday Inn Express Leicester will surely be your pick as it stands right next to the stadium. Otherwise, there are the usual national chain hotels in Leicester’s city centre, which is at walking distance from the stadium.

Click here for an overview of hotels near King Power Stadium.

Following Leicester’s title winning season, the club now sell out most games, though tickets for many games still tend to be available if bought well in advance.

Leicester City have divided their home matches into three pricing categories. Prices for Category C matches, the cheapest but also rarest, range from £26.00 for a seat behind the goal or in one of the corners to £48.00 for a central seat at one of the sides. Tickets for Cat A matches, the most expensive, cost between £30.00 to £50.00.

Leicester City offers guided stadium tours that include access to the dressing rooms and players tunnel. The tour lasts about 60 minutes.

Tours tend to run four times a day one or two Sundays a month. Tours cost £10.00.

Bookings can be made online, by phone +44 (0) 844 815 5000, or in person at the City Fanstore at the King Power Stadium. Booking in advance is highly recommended as most tours sell out.

Photos of the King Power Stadium