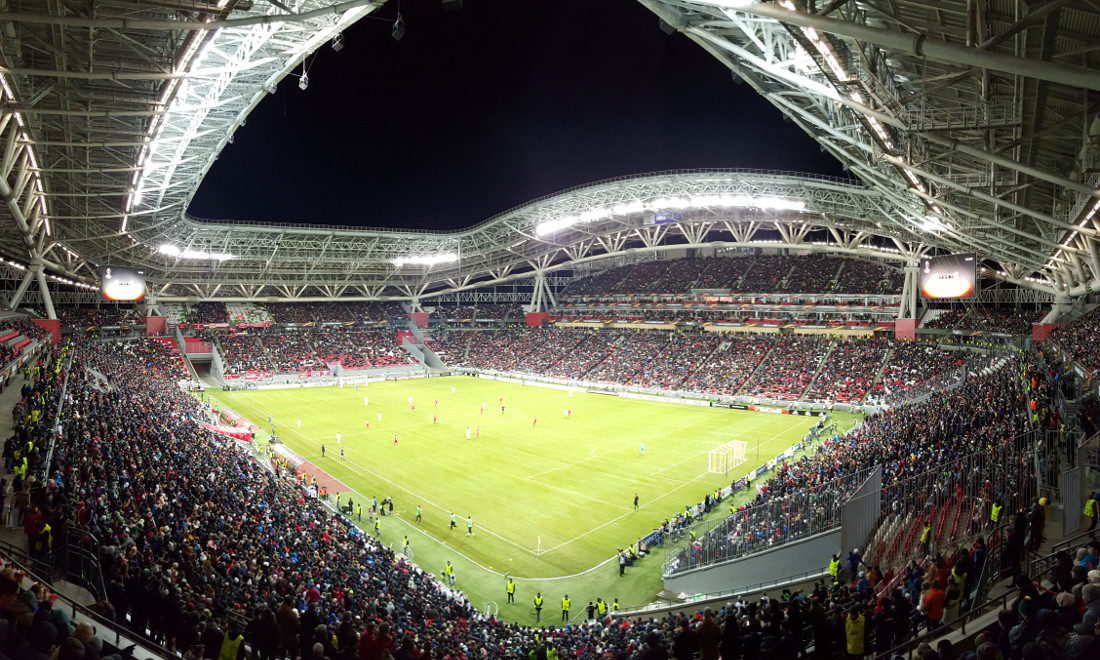 The Kazan Arena was built to provide Rubin with a modern home, to serve as the main venue of the 2013 Summer Universiade, and to be one of the playing venues of the 2018 World Cup.

Construction of the stadium started in May 2010 and was completed in early 2013. The Kazan Arena first opened for the opening ceremony of the 27th Summer Universiade, and eleven days later also hosted the closing ceremony.

Further improvement works were performed after the Universiade and subsequent pitch problems meant that the first football match wasn’t played until 26 May 2014 when Russia and Slovakia squared off in a friendly.

In 2015, the stadium hosted the FINA World Aquatics Championships, for which the football pitch was replaced by two swimming pools.

The Kazan Arena has furthermore been selected as one of the playing venues of the 2018 World Cup, during which it will host four first round group games, one round of 16 games, and one quarter-final.

The arena is also one of the four playing venues of the 2017 Confederations Cup.

How to get to the Kazan Arena

The Kazan Arena is located in the north-east of the city of Kazan, on the west bank of the Kazanka river, at about 6 kilometres from central Kazan.

The stadium can be reached with either tram 5 or 6. Tram 5 runs from Passazhirsky main railway station in central Kazan not far from the Kazan Kremlin and Rubin’s former Central Stadium. Tram 6 connects the Kazan Arena with destinations in the north of Kazan. Get off at stop Kazan Arena.

Alternatively, you can catch trolleybus 7, also from central Kazan, or one of the many local buses that pass the stadium.

Eat, drink, and sleep near the Kazan Arena

The Kazan Arena is located in a regenerated area on the banks of the river Kazanka, which mainly consists of large apartment blocks. While there might be a local restaurant around, eating and drinking is better done in central Kazan.

Alternatively, there is the Riviera complex, right after crossing Leninskaya Dam over the Kazanka river, which lies at 20 minutes walking from the Kazan Arena and consists of a water park, cinema, shops, and a number of places to eat and drink.

The Riviera complex also boasts the Riviera Hotel, which has access to the water park. Hotel MANO is an alternative, but otherwise hotels on the west bank of the river are scarce. There are, however, a few well-rated hostels such as Urbis Hostel and Move Hostel, and a good few apartment rentals close by.

Click here for an overview of hotels near the Kazan Arena, and here for hotels in Kazan’s city centre.

Tickets for Rubin matches can be bought online, at the ticket office at the Kazan Arena, or at any of the other authorised sales outlets, though none are in the centre.

Rubin doesn’t normally sell out at the Kazan Arena. They may at times still play a low-profile match at the old Central Stadium.

Rubin have divided their home games into three pricing categories. Tickets in the cheapest category range in price from RUB 200.00 for a seat in one of the corners to RUB 700.00 for a central seat at the main stand. Prices go up for the top category to between RUB 400.00 and RUB 1,500.00.

Photos of the Kazan Arena