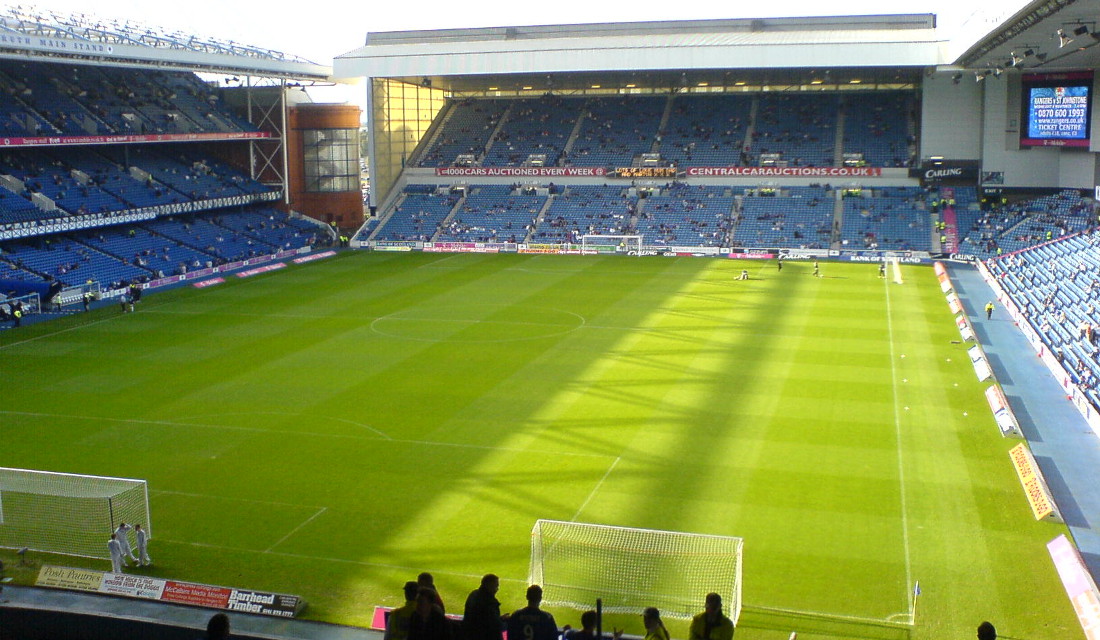 Rangers FC moved to Ibrox in 1899, leaving behind the original Ibrox Stadium. The first match played at the stadium was a match versus Hearts on the 30th of December 1899.

Ibrox was initially oval-shaped, had a track circling the pitch, and mainly consisted of wooden scaffold type terraces. In its first few months it got rapidly expanded to a capacity 75,000.

In 1902, Ibrox was awarded an international match between Scotland and England. However, 51 minutes in the match part of the wooden terraces collapsed and 26 people died. The incident led to the prohibition of wooden scaffold type terraces in favour of solid earth banking.

The removal of the wooden scaffolding stands after the incident reduced capacity to 25,000, but the stands were quickly replaced by terraces with a base of earth banking.

Ibrox underwent its next major redevelopment in 1928 with the construction of the characteristic red-brick grandstand, designed by Archibald Leitch. The stadium could at that point hold more than 80,000 fans, but was further expanded in the 1930s by increasing the banking of the terraces

Ibrox achieved its record attendance in 1939 when 118,567 supporters visited the Old Firm match against Celtic. Few changes were made to the stadium in the decades that followed.

Ibrox was again the site of a major stadium disaster in 1971. This time, 66 people were killed in a crush that happened at one of the exits after a game against Celtic. This resulted in the gradual conversion of the stadium into an all-seater, which started with the placement of benches in the North Stand.

Subsequent works included the construction of tree new stands, modelled on the rectangular shape of Dortmund’s Westfalenstadion. The first was the new Copland Road Stand, which opened in 1978, and which was followed by a new West Stand in 1979 and a new Govan Stand in 1981. The original Main Stand was the only one left standing.

Ibrox got further improved and expanded between 1990 and 1997 by a series of smaller extensions and the refurbishment of the main stand. The works were capped with the installation of two Jumbotron screens in the two remaining empty corners.

(photos of the present Ibrox Stadium below)

How to get to Ibrox Stadium

Ibrox is located slightly south-west of Glasgow’s city centre on the south bank of the river Clyde at about 2.5 miles from the central rail station and city centre.

The stadium stands close to the M8 motorway. Exit either at junction 23 or 24, and turn north. After a few hundred metres turn right at the roundabout. The stadium is on your left hand side.

If using public transport, Ibrox is best reached by metro. The circular Glasgow subway system links Ibrox with the city centre. Board the metro in the centre, e.g. at Buchanan Street or St Enoch, and get off at station Ibrox. The journey is slightly quicker via the Outer Circle, taking 10 to 15 minutes.

Ibrox Stadium is located in a quiet area which is a mix of residential buildings, light industry, and offices. There are a few pubs and eating options, mainly on Paisley Road West toward the centre, but the options obviously pale in comparison with the city centre.

The area around Sauchiehall Street and Bath Street boasts various pubs and bars and is not far from the Cowcaddens and Buchanan Street metro stops. The Merchant City area has also many eating and drinking options and lies close to the St. Enoch metro stop.

The Swallow Glasgow Hotel lies a short walk from Ibrox, gets decent reviews, and is very affordable. The Ibis Budget Glasgow lies further away toward the centre but can still be walked from. The Campanile Hotel and Hilton Garden Inn lie on the other side of the river Clyde, but still (just) at walking distance. The Sherbrooke Castle Hotel, on the other side of the M77, is for those on a very large budget.

Click here for all hotels near Ibrox Stadium. Transport connections from the centre are good though, which means that you can just as well stay there. Click here for the options.

Tickets can also be bought on the gate on the day of the match. Rangers’ attendances have remained high in the lower divisions, but tickets will be available for most regular matches.

Rangers offer guided stadium tours that include access to the home dressing room, the players’ tunnel, dugouts, and the trophy room. The tour lasts about 90 minutes.

Tours typically run every Friday, Saturday, and Sunday multiple times a day. There are no tours on matchdays.