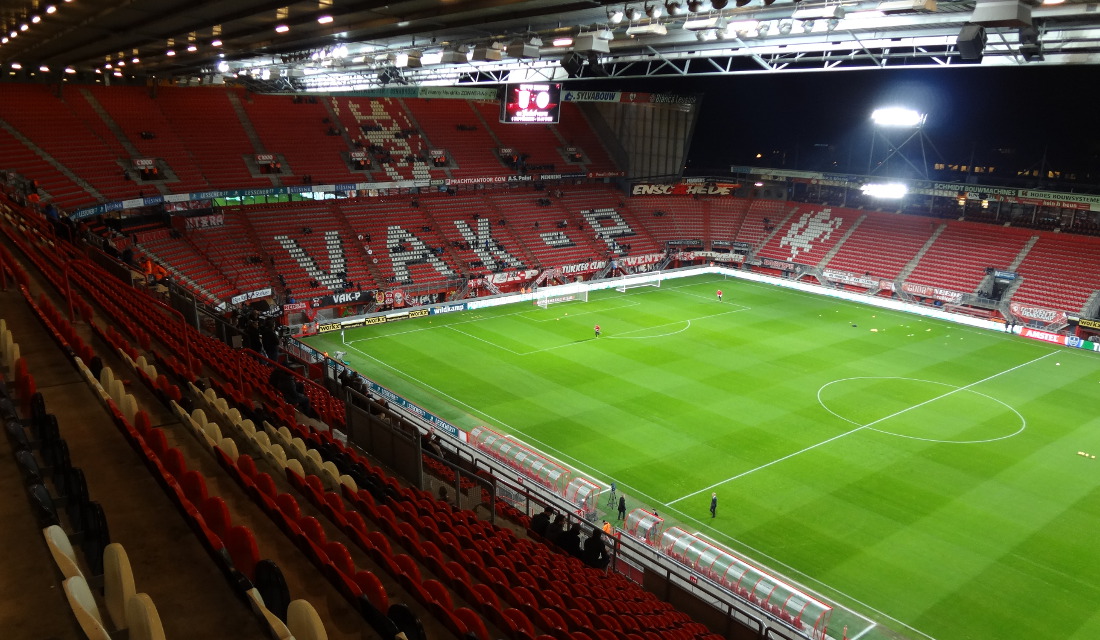 The Grolsch Veste replaced FC Twente’s old Diekman Stadion, which had been built in 1965, but lacked facilities and could not meet modern standards.

Construction of the Grolsch Veste, then still called Arke Stadion, started in January 1997. The Arke Stadion officially opened on the 10th of May 1998 with a league match between Twente and PSV Eindhoven (3-0).

The stadium could initially hold 14,000 spectators and from the beginning consistently sold out. It therefore did not take long for Twente to start making plans for an expansion.

In 2007, works started to add a second tier to half of the stadium in the shape of an L-shape, which increased capacity to 24,000 seats. Works finished one year later, and at the same time the club changed the name to Grolsch Veste, after local beer brewer Grolsch.

The Grolsch Veste continued to sell out, and Twente therefore quickly decided to execute the second stage of the plans and expand capacity to 30,000.

Works were to be finished in the summer of 2011, however a few weeks before completion the roof structure collapsed, leading to the death of two construction workers. Works were halted, the incident investigated, and after a delay of a few months construction continued and was completed in October 2011.

Twente had tentative plans to extend the stands to pitch level and complete the second tier over the entire stadium, resulting in a capacity of 44,000, however these seem to have been put on hold for the moment.

How to get to the Grolsch Veste

The Grolsch Veste is located on the north-western edge of the city of Enschede, approximately 4.5 kilometres from Enschede’s main railway station and city centre. It is about the same distance from Hengelo’s city centre, a smaller city located north-east from Enschede.

If coming by car from the west of the Netherlands, take the A1 and then the A35 in the direction of Enschede. Leave the A35 at exit 26 Enschede-West. Turn left (north), and after a few hundred metres exit again in the direction of Universiteit. Turn left at the traffic lights, and follow the road for about  2.5 kilometres. Turn left after the bridge, and the stadium will show up quickly on your left.

If using public transport, the Grolsch Veste is best reached by train from either Hengelo’s or Enschede’s main railway station. The stadium lies next to Enschede Drienerlo train station, which is a 5-minute journey from both the above stations.

Eat, drink, and sleep near the Grolsch Veste

The Grolsch Veste is located on a modern office park not far from the University of Enschede campus. Next to the stadium lies a leisure centre, which includes a cinema, bowling, and some food establishments.

Otherwise, the city centre of Enschede offers sufficient eating and drinking options for a night out, though it does not rate amongst Holland’s most interesting cities. The city of Hengelo is an alternative, but smaller and quieter than Enschede.

There is one hotel, the Hampshire Hotel, located close to the Grolsch Veste. It lies at short walking distance, gets decent reviews, but is not the cheapest. Conference Hotel Drienerburght is a somewhat cheaper option that is situated a little further away at 15 to 20 minutes walking. Click here to see the overview of hotels near the Grolsch Veste.

Alternatively, there are a few hotels in Enschede and Hengelo city centre, but the options are generally rather limited. If arriving by car, there are a few more roadside and out-of-town hotels that may be an option.

Tickets for FC Twente matches can be bought online, or at the ticket office at the stadium.

If tickets remain available, these can also be bought at the stadium before the match. Twente used to sell out most home matches, but attendances have dropped somewhat in recent years which means that for most matches tickets are rather easily available, also on the day.

Twente does regularly require possession of a Twente Club Card to be able to buy tickets so make sure to check the official website if any restrictions apply.

Ticket prices depend on the opponent. Category B tickets, the cheapest, range in price from €17.50 for a seat behind the goal to €30.00 for a lower-tier seat at the long side. Prices get increased for Category A matches to between €22.50 and €35.00 and even further for the matches against Ajax, PSV, and Feyenoord.

FC Twente organises guided stadium tours that last about 90 minutes and include the FC Twente museum.

Check online for current dates and reservations. The tour costs €6.00.

Photos of the Grolsch Veste