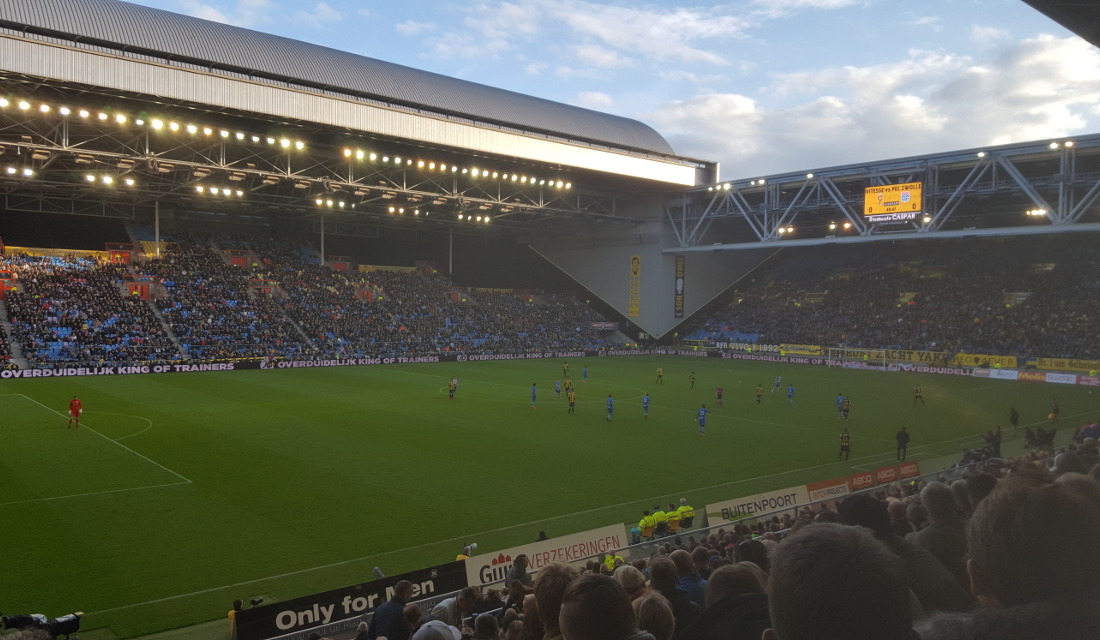 The first stadium with both a retractable pitch and roof, the GelreDome has been a true pioneer as a multifunctional stadium.

The GelreDome was built to serve as a multifunctional stadium suited for sports, concerts and other events. It was the first football stadium in the world to have a retractable pitch, and, after the Amsterdam ArenA, the second stadium in Europe to have a sliding roof.

The idea of building a multifunctional stadium, which had more than double the capacity of Vitesse’s old Nieuw Monnikenhuizen stadium, came from former Vitesse chairman Karel Aalbers.

The ambitious chairman had been playing with the idea from as early as the late 1980s, but it took until 1996 and the prospect of the upcoming Euro 2000 championships for construction to finally begin.

The GelreDome opened two years later, on 25 March 1998, with a league match between Vitesse and NAC Breda (4-1).

During the Euro 2000 tournament, the stadium hosted three group matches.

The GelreDome, in the end, also led to the downfall of chairman Karel Aalbers as the financial obligations were more than the club could bear. The chairman was removed from his post and in the following years the club had to be financially assisted by the city of Arnhem to be able to survive.

In the last decade, the GelreDome has turned into one of the prime concert venues of the Netherlands, and is praised for its acoustics, climate control system, and roof that does not let in any sunlight.

How to get to GelreDome

The GelreDome is located toward the south of the city of Arnhem on the south bank of the river Rhine at about 2.5 kilometres from Arnhem’s city centre and the central rail station.

On matchdays, shuttle buses run between Arnhem’s railway station and the stadium. The journey takes no more than 5 minutes.

On non-matchdays, take bus 7 from Arnhem central rail station. The bus leaves about every 10 minutes for the 7-minute ride to the stadium. Take the bus in the direction of Rijkerswoerd. Get off at stop GelreDome.

Eat, drink, and sleep near the GelreDome

The GelreDome is located in a quiet residential area with little around in terms of eating and drinking, which means you can better do this in the nearby and rather pleasant city centre of Arnhem.

There are neither any hotels near the GelreDome, but a few options in Arnhem’s city centre. You can, of course, also stay in the west of The Netherlands and catch a train back after the match.

Tickets for Vitesse games can be bought online, or at the Vitesse club shop at the stadium.

Vitesse require possession of a Vitesse Fancard to be able to buy tickets for some matches. Most matches go on general sale though.

If tickets remain available, and Vitesse hardly ever sell out a match, these can also be bought on the day of the match at the stadium. However, the same Fancard requirement may apply.