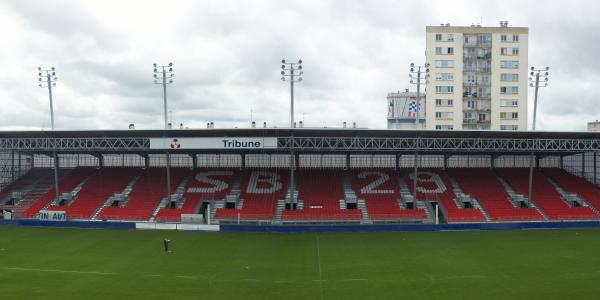 It was a relatively modest stadium that remained almost unchanged until a new main stand was built in 1982. At that time it also changed names to Stade Francis-Le Blé, after a former mayor of the city.

First plans for a major redevelopment were made in 2004, but the project was soon abandoned. However, after the rise of Brestois to Ligue 1, a series of modernisations were undertaken and one new stand was built, which opened in 2010.

Stade Francis-Le Blé is located in the north-east of the city of Brest, almost 2.5 kilometres from Brest’s city centre and its central rail station.

If arriving by car from the E60, take exit Brest-Est. Turn right underneath the railroad tracks and follow the road toward the city. After about a kilometre turn right at the roundabout onto the Rue de Quimper. Follow until you see the stadium on your right.

If arriving from the E50, drive straight into town toward Brest-Centre. At the second roundabout take the second exit toward Centre Sportif. Follow the road, and after about 1.5 kilometres turn slightly left onto the Rue de Quimper (signaled Quimper). The stadium will be on your left.

Bus 25 and 27 pass right next to the stadium. Both can be boarded at Place de Liberté in the city centre. Take bus 25 in the direction of Plougastel, or bus 27 in the direction of Kerhuon, and get off at stop Stade F. Le-Blé. The ride takes about 10 minutes.

Tickets for Stade Brestois matches can be bought online, at the club boutique at 4 Place de Liberté in the city centre, or at any Leclerc, Carrefour, Super U or Géant supermarket.

If tickets remain available, these can be bought at the gates of the stadium on the day of the match. Brest do tend to sell out a few high-profile matches per season.

Stade Brestois operate two pricing categories for match tickets. Tickets for regular matches range in price from €13.00 for a seat behind the goal to €37.00 for a central seat at the main stand. Tickets for “Gala” matches cost between €19.00 and €60.00.