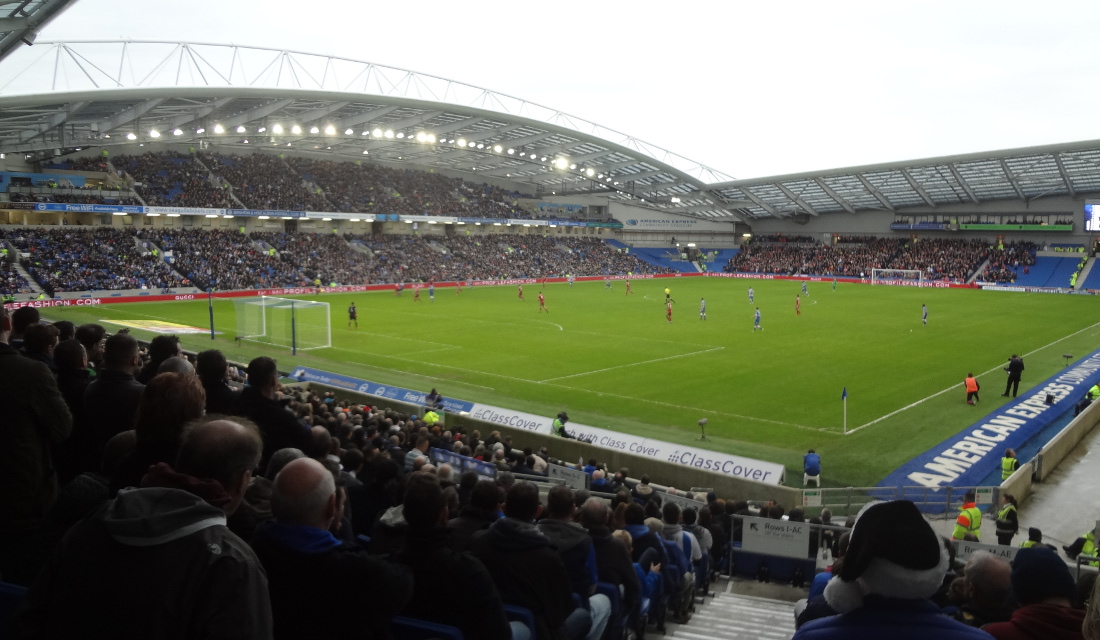 The Amex, officially called the American Express Community Stadium and also referred to as Falmer Stadium, officially opened on the 30th of July 2011 with a friendly match between Brighton and Tottenham Hotspur (2-3).

Brighton had been planning the construction of a new stadium from as early as 1995 after former chairman Bill Archer had sold their Goldstone Ground to property developers.

When Brighton became homeless they first ground-shared with Gillingham for two seasons, and then moved to the Withdean Stadium, an athletics stadium in Brighton that, though it was upgraded, lacked the modern facilities for League football.

In the end it took Brighton until 2007 to get planning permission due to various legal challenges. Building works subsequently began in 2008 and in 2010 the club confirmed a naming rights sponsorship deal with American Express.

The Amex was designed to allow for an easy capacity increase to 30,000 seats, and already in December 2011 the club started planning for expansion.

Brighton received planning permission in early 2012 and an extra 5,000 seats were added before the start of the 2012-13 season by creating a second tier on the East Stand and closing the corners of the South Sand. Brighton added an additional 3,000 seats in early 2013 to bring capacity to 30,500 seats, which was again increased to 31,800 in 2021 following some small adjustments.

How to get to The Amex

The Amex is located north-east of Brighton near the University of Sussex campus at about 4 kilometres from Brighton’s main rail station, and slightly more from Brighton’s seafront with its pier.

The stadium lies just south off the A27 motorway. Take the exit toward the B2123 Falmer.

If using public transport, The Amex can be reached by train. Falmer Rail Station lies practically adjacent to stadium. Trains from Brighton Rail Station leave every 10 to 20 minutes for the 10-minute journey. From London a transfer in Lewes or Brighton is required.

Alternatively, bus 25 can be used to reach the stadium. Take the bus on Western Road in Brighton’s centre. The ride from the centre to stop Falmer Station takes about 20 minutes.

Eat, drink, and sleep near The Amex

The Amex is located outside of the city of Brighton, bordered by the University of Sussex campus, some residential housing and farmlands. There is little around in terms of eating and drinking, which is recommended to be done in pleasant Brighton.

The are neither any hotels in the close vicinity of The Amex, but there is plenty of choice in Brighton on the seafront. Click here for an overview of hotels in Brighton.

Tickets for Brighton matches can be bought online, or at the Ticket Office at The Amex Stadium.

Tickets are also sold at the stadium on the day of the match. Brighton often sell out though so booking in advance is recommended.

Tours run multiple times a week, typically on Mondays, Thursdays and Saturdays in the morning or afternoon. Check the official website for upcoming dates and bookings. Bookings can also be made at the Ticket Offices at The Amex.

Photos of The Amex