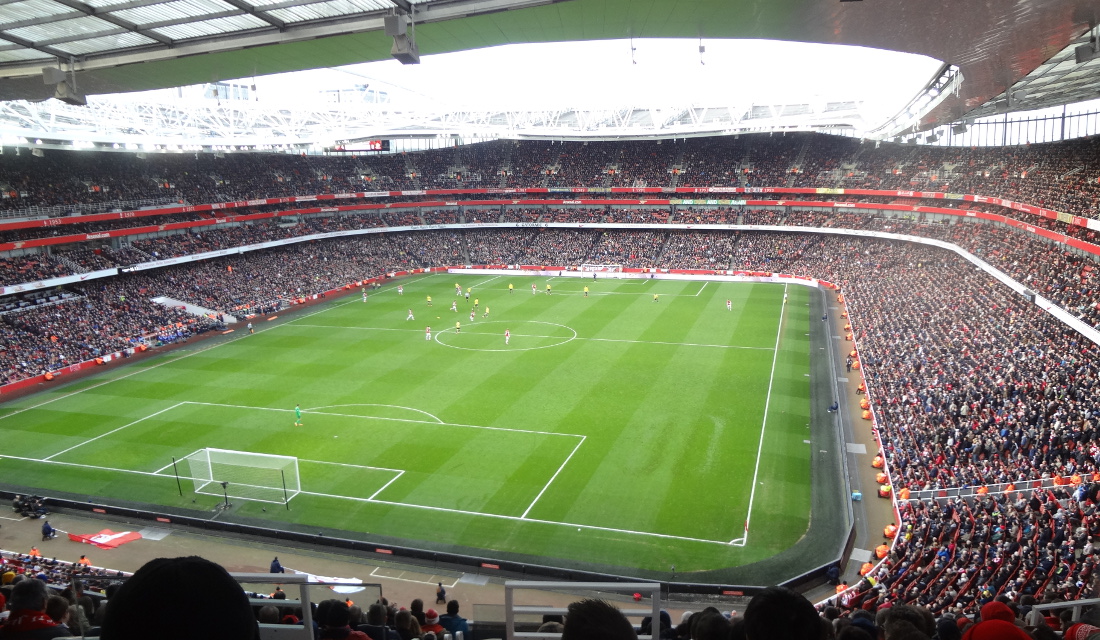 One of England’s new football cathedrals. Modern, comfortable, great sightlines, but rarely with that atmosphere of the old Highbury.

The Emirates Stadium replaced Arsenal’s previous home Highbury, which had become too small and lacked the possiblities for expansion being hemmed in by housing.

First plans for the construction of a new stadium were made in the late 1990s, but also a move to the new Wembley Stadium was considered.

In the end a site was chosen just a few hundred yards away from Highbury, and, after a few delays, construction of the stadium started in 2004. The total project budget amounted to £390 million.

The Emirates Stadium officially opened on the 23rd of July 2006. The first match was a testimonial match for Dennis Bergkamp featuring an Arsenal and Ajax side.

Due to the competition of nearby Wembley Stadium, the Emirates Stadium has never hosted the English national team, however the Brazilian national team has regularly staged friendlies at the stadium.

How to get to the Emirates Stadium

The Emirates Stadium is located in the Islington area, toward the north of London at just over 2 miles from Kings Cross St Pancras railway station.

There are multiple ways to reach the stadium by public transport. The underground (tube) is one option – the nearest tube station is Arsenal, which is on the Piccadilly line. Decent alternatives are stations Finsbury Park (Victoria and Piccadilly line) and Highbury & Islington (Victoria line and London overground). From both stations it is an approximate 10-minute walk to the stadium.

On non-matchdays, Holloway Road station (Piccadilly line) is located closest, but will be closed pre-match and is exit-only after the match.

Alternatively, one can catch a train to Finsbury Park or Highbury & Islington main line stations. It is a 5 to 10-minute journey coming from Kings Cross station. During the week trains depart from Moorgate as well. Drayton Park rail station, closest to the stadium, closes on matchdays.

Supporters are not advised to arrive by car on matchdays, and there is little parking available around the Emirates Stadium on non-matchdays.

Eat, drink, and sleep near the Emirates Stadium

The Emirates Stadium is located in the recently regenerated and rather quiet Highbury area. There are a few pubs and cafés in the immediate surroundings of the stadium, which is mainly residential, and some options to eat and drink along Holloway Road and Highbury Park road.

More nightlife can be found in the Islington area on Upper Street starting south of Highbury & Islington tube station – an approximate 15 to 20-minute walk from the stadium.

There are no hotels right near the Emirates Stadium, but a fair few options further north on Seven Sisters Road near Finsbury Park, which is a 15-minute walk from the stadium. The Queens Hotel and Best Western Highbury get the best reviews and go for about £100 a night, whereas the Pembury Hotel, Woodberry Down Hotel, and Central Park Hotel are more basic options.

Click here for all hotels near the Emirates Stadium. Of course, as there are various tube lines passing by the stadium, you can just as well choose a stadium in any part of Central London.

Arsenal is one of the clubs in the Premier League for which it is hardest to get tickets and one will often need an Arsenal membership to be able to acquire tickets. The most basic Red level membership currently costs £33.00 and with it tickets will generally be available in pre-sale.

A further booking fee of about £2.00 applies. Tickets for members are a little bit cheaper.

Arsenal offer the option to see the Emirates Stadium through a self-guided stadium tour. You can walk through the stadium at your own pace with the company of an audio guide. The route includes the changing rooms and players’ tunnel.

Alternatively, the club offers guided stadium tours by an Arsenal legend. Both tours include access to the Arsenal museum.

The stadium is opened 7 days a week for self-guided stadium tours. Entry is from 10:00 am with the last entry at 5:00 pm. There are no tours on matchdays and the stadium may close earlier on the day before a match or event. It takes anything from 55 to 90 minutes to complete the walk around the stadium.

The legends tour starts every day at 1:00 pm and lasts 75 minutes.

Photos of the Emirates Stadium