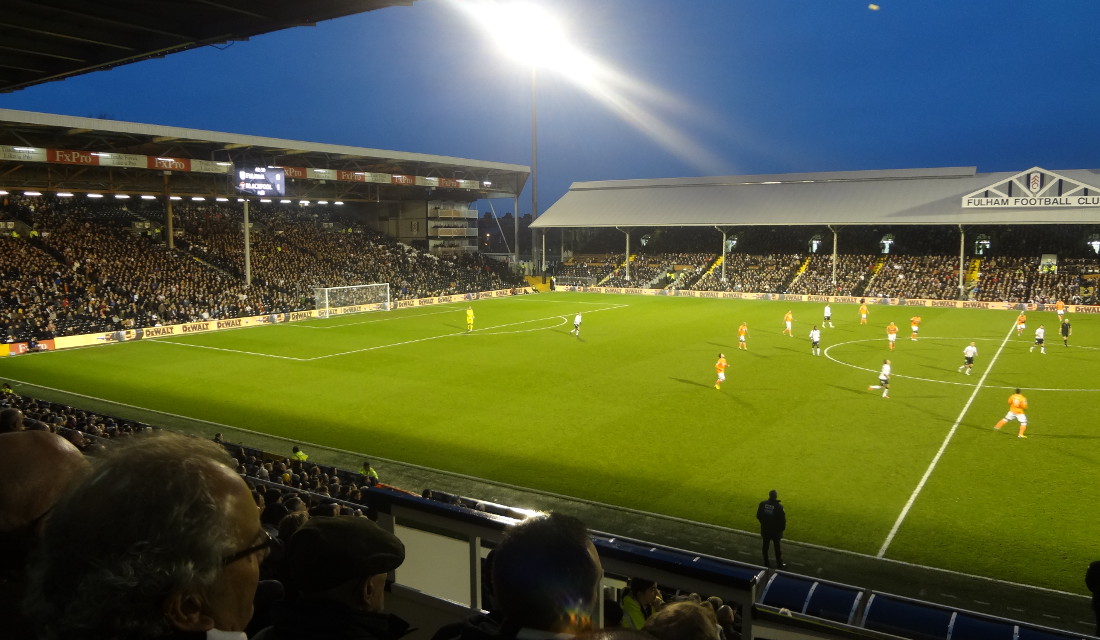 Craven Cottage has a history that dates back to 1780 when a cottage was built in the woods and the surrounding fields were used for various sports. The site, however, later fell into disuse and the original cottage burned down in 1888.

Fulham had already played at various grounds when their eye fell on the site close to the river Thames. After cleaning up the overgrown field, they played their first match at the ground in 1896. Craven Cottage at that time consisted of nothing more than a basic wooden stand.

This changed in 1906 when a first proper stand was built. The stand, currently called Johnny Haynes Stand, was designed by Archibald Leitch and had a characteristic red-brick facade. The stand was accompanied by a pavilion, which is the present-day Cottage.

Craven Cottage was further expanded with terraces in the next decades and reached its record attendance in 1938 when a total of 49,335 spectators attended a game against Millwall. One decade later, Craven Cottage hosted a few games during the 1948 Olympic Games.

In the following years, the stadium got further improved, concluding with the construction of the Riverside Stand in 1972. Fulham played most of the 1980s and 1990s in the lower leagues and therefore few further changes were made to Craven Cottage.

When Fulham started climbing up the league in the late 1990s and achieved promotion to the Premier League in 2001, the stadium was therefore not able to meet Premier League requirements. The club consequently moved to Loftus Road for a year (after a first year of dispensation), and expected to return to a brand-new stadium.

However, due to opposition to the reconstruction plans and spiralling costs, the plans had to be abandoned and instead was chosen to refurbish Craven Cottage. Works were completed in the summer of 2004.

Craven Cottage remained one of the smallest grounds of the Premier League, and Fulham therefore kept considering either moving to a new stadium (possibly to be shared with another West-London club), or further redeveloping Craven Cottage.

The club in the end decided to stay at Craven Cottage and developed plans to build a new Riverside Stand, raising capacity to 30,000 seats. While they had their plans approved in 2013, works on the stand are yet to start.

(photos of the present Craven Cottage below)

How to get to Craven Cottage

Craven Cottage is located in the Hammersmith and Fulham borough in the west of London, about 5 miles from the Houses of Parliament and Westminster Abbey. It sits on top of the banks of the river Thames and is bordered by Bishops Park.

The stadium is best reached with the underground (tube). From Putney Bridge station, which is on the District Line, it is a 10-minute walk to the stadium.

An alternative is Hammersmith station, which is served by trains on the Circle, District, Hammersmith & City, and Piccadilly lines, from where it is a 20-minute walk to the stadium.

Craven Cottage is difficult to reach by car, and due to parking restrictions it is not advised to arrive by car on matchdays.

Craven Cottage lies in the quiet and relatively well-off Fulham area. The immediate area around the stadium is mainly residential, but there are a few pubs and places to get something to eat near Putney Bridge tube station and Fulham High Street.

Right by Putney Bridge is the Premier Inn Putney Bridge hotel, which gets good reviews and is not unreasonably priced for London. The walk to the stadium through Bishop’s Park takes no more than 10 minutes.

Alternatively, you can opt to get a hotel near Hammersmith station, with the added advantage that you have got good transport connections to central London. The Best Western Hammersmith and Novotel London West are very decent options.

Finally, the Holiday Inn Express Earls Court and Ibis Earls Court near West Brompton tube station may also just be at walking distance (30 minutes) from the stadium. There are many more hotels near Earls Court station, which is a short metro ride away.

Click here for an overview of all hotels near Craven Cottage.

If tickets remain available, these can also be bought at the ticket office on the day of the match. Fulham rarely sell out in the Championship.

Tours tend to run a few times a month, generally on Friday, Saturday, or Sunday at 11:15 am. Check the Craven Cottage events website for exact dates and hours.

Bookings can be made online. Walk-ups are allowed, but subject to availability, and it is therefore advised to book in advance.