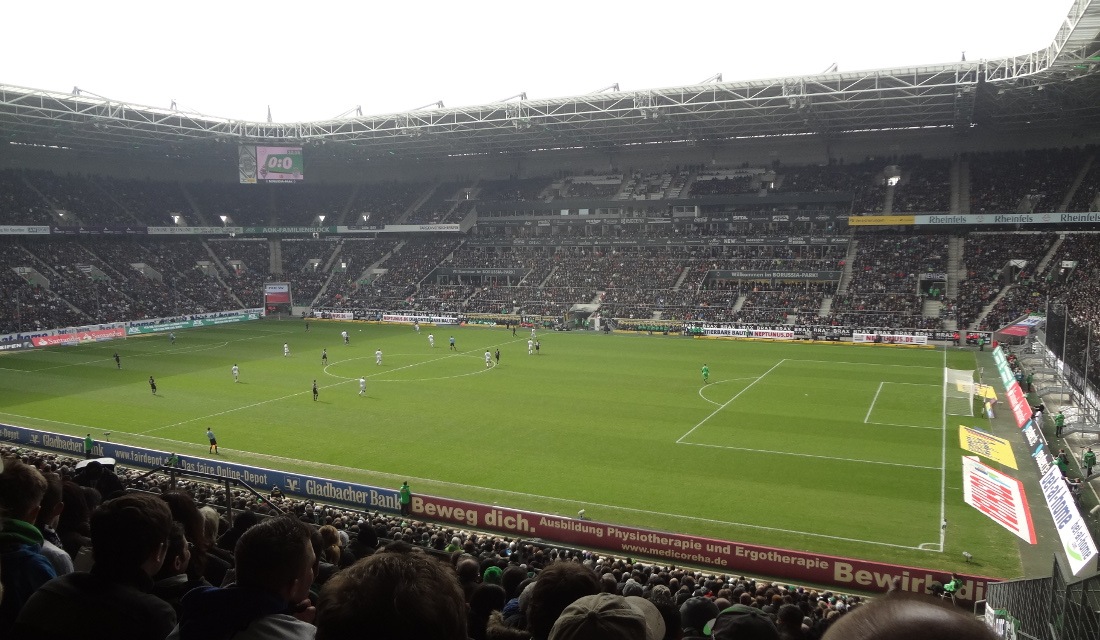 Borussia-Park replaced Borussia’s old Bökelbergstadion, which by the 1990s had become severely outdated. Construction of the new stadium began in November 2002 and finished in 2004. Total costs of construction amounted to €86.9 million.

Borussia-Park officially opened on the 30th of July 2004. Two weeks later it hosted its first match, a Bundesliga match between Borussia M’Gladbach and Dortmund that ended in a 2-3 defeat for the hosts.

Borussia-Park counts a total of 1,758 business seats and a further 684 seats in VIP lodges. It has the option of converting parts of the South Stand into standing areas, hereby increasing capacity to 59,771. Vice versa, when the standing areas of the North Stand are converted into seats for international matches, capacity is reduced to 46,287 seats.

How to get to Borussia-Park

Borussia-Park is located on the south-western edge of the city of Mönchengladbach, slightly more than 4 kilometres from the city centre and about one kilometre more from the city’s main railway station.

The stadium lies very close to the A61, which runs west of the city. Take exit Holt, turn onto the Aachener Straße (away from the city), and a few hundred metres later right onto the Straße Am Borussia Park.

On matchdays take exit Nordpark instead, and follow the B230 in the direction of Nordpark. Signs will guide you to Borussia-Park.

If using public transport, one can take a shuttle bus from Mönchengladbach’s main railway station (Hauptbahnhof). On non-matchdays take bus 17 in the direction of Mönchengladbach Südwall. Buses run every ten minutes and the journey takes about 15 minutes.

Alternatively, there are shuttle buses that run from train station Rheydt Hauptbahnhof (to which there are regular trains from Mönchengladbach Hauptbahnhof).

Eat, drink, and sleep near Borussia-Park

Borussia-Park is located just outside the city limits of Mönchengladbach and there is therefore little around in terms of eating and drinking, which is better done in the city centre.

Hotel Palace St George and Hotel Tannenhof are both a few hundred metres away from Borussia-Park. The latter is the cheaper option.

If tickets remain available, these can be bought at the stadium’s ticket windows on the day of the match. Borussia generally only sell out a few matches per season, but this can be more in a successful season.

If you do miss out on tickets, you can try your luck on Borussia’s official ticket exchange, or if even that fails, secondary ticketing websites like viagogo, though expect to pay over face value.

Tickets come in four different price categories: A-D. Tickets for a category D match, the cheapest, range in price from €19.90 for a seat behind the goal to €44.50 for a central upper-tier seat at the main stand. Prices for category A matches, the most expensive range from €47.50 to €64.50. Most matches are category C or D though, but expect to pay more for matches against the likes of Bayern of Dortmund. Standing costs either €14.50 or €17.00 depending on the match.

Reservations are required, and can be made by phone +49 (0) 2161 9293 1526, or email stadionfuehrung@borussia.de. For weekend tours reservations need to be made before Friday noon.