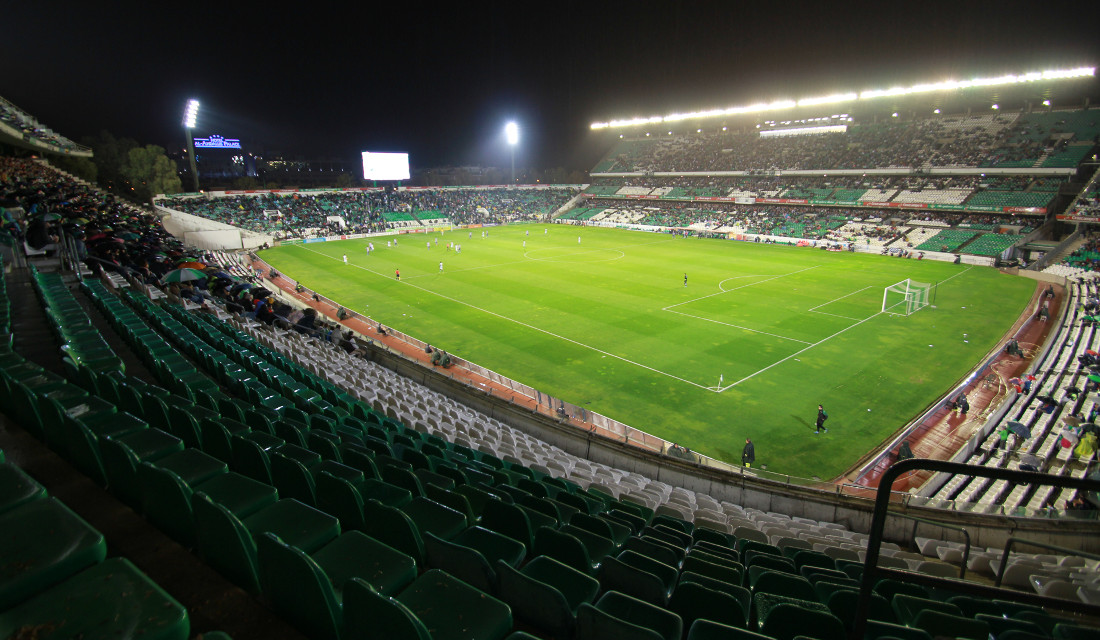 Estadio Benito Villamarín was built in 1929 for the Ibero-American Exposition that was held in Seville that year. The first football played at the stadium was an international between Spain an Portugal on 17 March 1929.

Soon after, Betis started playing occasional home matches at the stadium, though Campo del Patronato remained their regular home until 1936.

The stadium went initially by the name of Estadio de Heliópolis, was rectangularly shaped, and could hold about 18,000 sepectators.

Due to its close proximity to the river Guadalquivir, the stadium got heavily damaged in a flood in 1948.

Estadio de Heliópolis underwent a first redevelopment in 1958, and got bought by the club in 1961. The stadium remained rather modest though, and few changes were made until the 1970s.

The then-renamed Estadio Benito Villamarin underwent several small redevelopments in the 1970s, but only got properly developed with the perspective of the 1982 World Cup. It could then hold about 47,500 spectators.

During the World Cup, the stadium hosted two first round group matches.

Estadio Benito Villamarin remained pretty much the same until Betis in 1998 decided to almost completely rebuilt the stadium. New three-tiered stands were built on the north and eastern sides of the stadium, which complemented the already three-tiered West Stand.

At the same time, the stadium was renamed Estadio Manuel Ruiz de Lopera, after the then-owner of the club. Works, however, stalled after that and the remaining single-tiered South Stand was left single-tiered, nor were any roofs installed.

After Ruiz de Lopera had left the club in 2010, fans voted to reinstall the old name Estadio Benito Villamarin.

(photos of the present Estadio Benito Villamarin below)

How to get to Estadio Benito Villamarin

Estadio Benito Villamarin is located in the south of the city of Seville, about 3 kilometres from the historic city centre.

The stadium lies on the Avenida la Palmera, a large avenue which connects the stadium in one straight line with the centre. Around the city centre, the avenue – though with a different name – runs along the bank of the river Guadalquivir.

From the southern edge of the city centre (Prado de San Sebastián), catch bus 1 (to Glorieta Plus Ultra), 34 (to Los Bermejales), or 37 (to Bellvista).

From the bus station in the west of the centre, take bus 6 to Glorieta Heliopolis. The bus runs (partly) over the west bank of the river.

From the northern edge of the centre and eastern parts of the city you can catch bus 2 to Glorieta Heliopolis.

There is no direct bus connection from Seville’s central rail station to the stadium, but bus 1 passes about 500 metres west of the station and bus 2 about 1 kilometres north-east of the station.

All buses have very frequent service. Bus 1, 2, and 6 have their last stop near the stadium.

Estadio Benito Villamarin is located in a quiet residential area. There is the odd bar and restaurant around, mostly in the area toward the river, but you are likely better off eating and drinking in Seville’s historic centre.

There are a few hotels hotels around Estadio Benito Villamarin. Hotel Silken Al-Andalus Palace is located 200 metres from the stadium, gets good reviews, and is reasonably priced. Boutique Hotel Holos is a little more expensive, while Hotel Sevilla Palmero is somewhat further away, though still easily at walking distance.

If you have more money to spend, then Villa de la Palmera will likely be your pick, and hostel Albergue Interjoven is for those on a tight budget. For all hotels near Estadio Benito Villamarin click here.

Of course, if you spend more a day in Seville, staying in the historic centre may be more interesting. You can find the options here.

Tickets for Real Betis games can be bought at the ticket windows (taquillas) of the stadium in the week before the match (closed between 2:00pm and 5:00pm).

Tickets are also available on the day of the match before kickoff. Real Betis’ attendances have been among the highest in La Liga though the club have tended to sell out few games. However, following the expansion of the stadium in 2017 demand has further surged so buying in advance is recommended.

Ticket prices generally start at €30.00 for an upper-tier seat behind the goal and range up to €60.00 for a central seat at the main stand, though prices can be increased for high-profile fixtures.