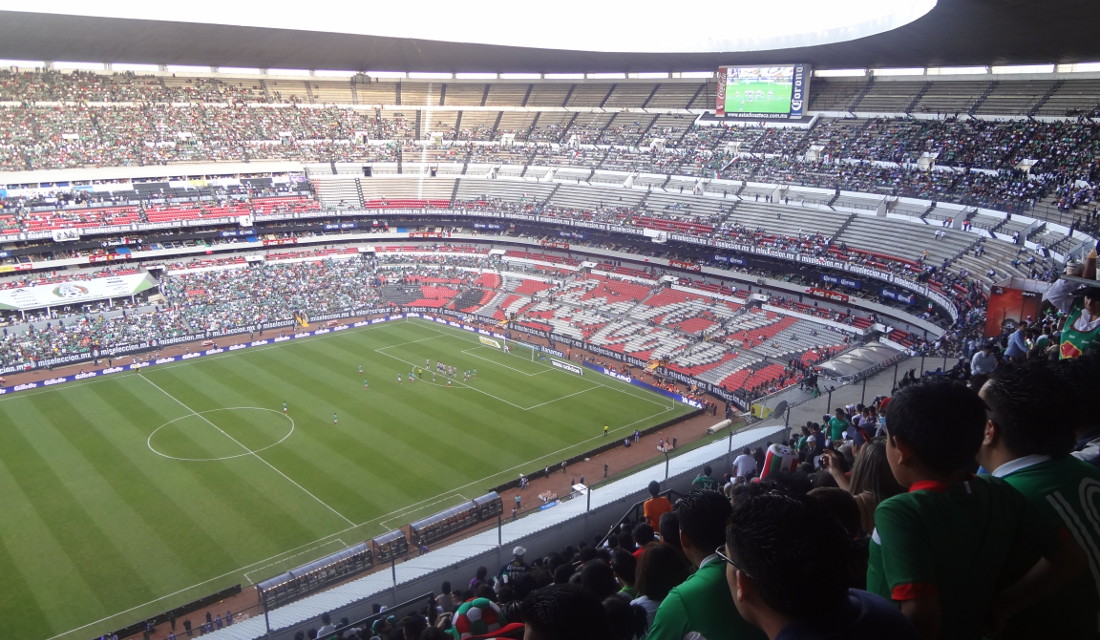 Estadio Azteca was built in the 1960s to accommodate the growing support of Club America and to provide Mexico with a flagship venue for the upcoming 1970 World Cup.

Estadio Azteca got designed by architect Pedro Ramírez Vázquez after a careful study of the most famous European stadiums of that time. Construction of the stadium, which took a total of 4 years, was not easy due to the hard volcanic rock the land consisted of.

Estadio Azteca officially opened on 29 May 1966 with a friendly match between America and Italian side Torino (2-2).

During the 1970 World Cup, it hosted a total of 10 matches, among which a semi-final and the final between Brazil and Italy (4-1).

Sixteen years later, Estadio Azteca again hosted a World Cup final, and until 2014 it had been the only stadium to host two World Cup finals (now sharing the honour with Maracana).

In the following decades, safety measures brought back capacity from 115,000 in 1986 to around 100,000 in the 2000s. In 2016, the stadium underwent a large refurbishment including the addition of VIP facilities, which reduced capacity to 84,000 seats.

In 2018, Cruz Azul moved back into Estadio Azteca, having also had it as its home in the 70s and 80s, leaving Estadio Azul.

The stadium is also a regular playing venue for the Mexican national team, and for years was the home of Necaxa before they moved to Aguacalientes.

How to get to Estadio Azteca

Estadio Azteca is located in the south of Mexico City, about 15 kilometres from the historic city centre.

The stadium is easy to reach by metro and the connecting light rail. First take metro line 2 (which crosses the city’s historic centre) to its final stop Tasqueña, and then transfer to the light rail (tren ligero), which has a similar look as the metro, but for which a separate ticket is required. Get off at stop Estadio Azteca.

If arriving by car, the stadium can be reached by driving all the way south over the large Avenida Tlalpan (which originates in the historic centre). Stay on the right side of the metro and light rail tracks, and the stadium will automatically show up on your right.

Alternatively, the stadium can be reached from the Anillo Pereférico ring road, which passes just south of the stadium. Take exit Estadio Azteca. There is a lot of parking at the stadium, but expect to get stuck in traffic.

Estadio Azteca is located in a predominantly residential area, and there is little entertainment around. The area north of the stadium is a bit seedy, but there is no reason to venture there. Of course, you can always get a quesadilla outside the stadium at one of the many stalls before the match.

A little further away, but still at walking distance (though you might prefer a taxi), the Fiesta Inn is a nice option. It is located next to Gran Sur shopping centre. The Holiday Inn Medica Sur is another decent option at similar distance.

There are, of course, a lot of hotels in Mexico City’s historic centre, from where you can easily catch metro line 2. Slightly more upscale are the areas around the Avenida Reforma, including the lively Condesa, Polanco, and Roma areas with their nightlife), which are also packed with hotels. You need an extra metro change though to get onto line 2.

Tickets for Club América matches can be bought online via Ticketmaster, at the ticket windows (taquillas) at the stadium, or through one of the Ticketmaster sales outlets.

Tickets can also be bought at the gates of the stadium on the day of the match. Due to the size of the stadium, América rarely sells out.