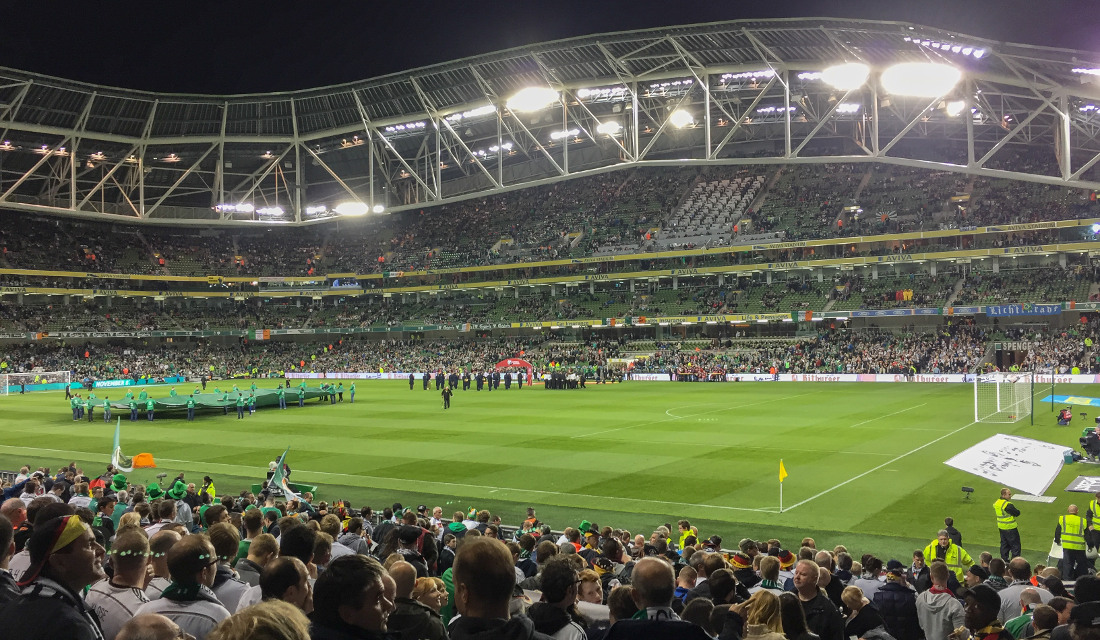 Aviva Stadium is the national stadium of Ireland and the playing venue of the Irish national team. It also hosts most of the nation’s major rugby matches.

Aviva Stadium was built on the place of the old Lansdowne Road Stadium, which was one of the oldest stadiums in the world when it got demolished in 2007. Construction of Aviva Stadium started right after and finished in early 2010. The stadium had a price tag of €410 million and was designed by Populous.

Aviva Stadium officially opened on 14 May 2010. First football was played on 4 August 2010 when a League of Ireland side hosted Manchester United for a friendly (1-7).

In 2011 the stadium was the playing venue of the Europa League final between FC Porto and SC Braga (1-0).

Aviva Stadium was part of the initial selection of playing venues for the Euro 2020 Championships, but was removed because it could not offer assurances that spectators would be admitted due to the ongoing Covid-19 pandemic.

The stadium’s most notable feature are its curvilinear shaped stands enclosing the complete stadium, a shape chosen to make sure that the surrounding houses get enough sunlight. The stadium holds a total of 10,000 premium seats as well as 1,300 seats in corporate boxes.

How to get to Aviva Stadium

Aviva Stadium is located in central Dublin in the Ballsbridge area, about 2 kilometres from the city centre. The walk from St Stephen’s Green park or the Trinity College area will take 20 to 30 minutes.

From Connolly Station or Pearse Station take a DART train southbound. Get off at station Lansdowne Road, which lies right next to the stadium.

From the Temple Bar area take bus 7 to Loughlinstown/Cherrywood.

Aviva Stadium is located in a rather quiet residential area. There is relatively little around in terms of eating and drinking, though you will surely bump into the odd pub on your way to the stadium.

Ariel House and Butler’s Townhouse are two hotels that are only a few minutes walking from the stadium. Both get excellent reviews. Ballsbridge Hotel, Roxford Lodge Hotel, and Grand Canal Hotel are other well-rated options.

Click here for an overview of hotels near Aviva Stadium, and here for other options in central Dublin.

Ticket sales for Republic of Ireland home games go via the Irish FA.