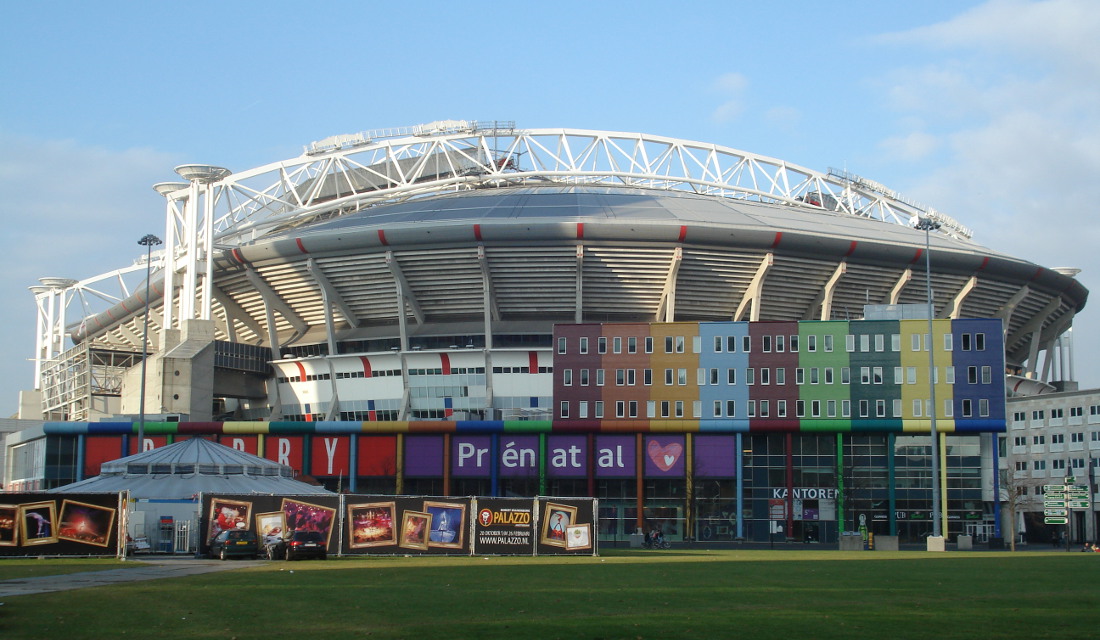 One of Europe’s first large modern stadiums and still an icon in world football.

The Johan Cruijff ArenA, previously called Amsterdam ArenA, was built between 1993 and 1996. It replaced Ajax’s previous home De Meer, which, with a capacity of 19,000 seats, had become too small for the club.

The Amsterdam ArenA officially opened on 14 August 1996 with a match between Ajax and AC Milan (0-3). The first goal in the new arena was scored by Dejan Savicevic. Total construction costs had amounted to €96 million.

The Amsterdam ArenA was the first football stadium in Europe with a retractable roof. It takes about 20 minutes to open or close the roof.

Shortly after the opening, it turned out that the stadium design had not accounted for good grass growing conditions, and as a result the pitch had to get renewed up to 5 times a year. These problems were later resolved with the installation of innovative grass growing technology, consisting of a combination of lamps, wind turbines, and water sprinklers.

The Johan Cruijff ArenA counts with a total of 2,229 business seats and a further 820 seats in sky boxes. The stands are among the steepest in Europe, with the second tier having an angle of 37 degrees.

The Amsterdam ArenA was one of the playing venues of the Euro 2000 championships, hosting three group match, a quarter-final, and the semi-final between Holland and Italy (0-0).

The stadium has been chosen to be one of the playing venues of the Euro 2020 tournament, which is played across different countries. For this, the stadium got refurbished resulting in larger concourses and a new facade.

How to get to the Johan Cruijff ArenA

The Johan Cruijff ArenA is located in a modern office park in the south-east of Amsterdam, approximately 10 kilometres from the city centre.

The stadium is best reached by train or metro. Train station Bijlmer ArenA lies next to the stadium and can be reached in 15 minutes from Amsterdam Central Station. There is very regular service.

The metro takes only little longer and stops at the same station as well as station Strandvliet/ArenA that lies on the north side of the stadium. Take metro 54 from Amsterdam Central Station, or any of the stops in Amsterdam city centre. Metro 50 connects the stadium with southern and western parts of the city (e.g. Amsterdam Zuid station).

Eat, drink, and sleep near the Johan Cruijff ArenA

The Johan Cruijff ArenA is part of an entertainment and shopping complex, which includes a large cinema and two of Holland’s principal concert venues (the Ziggo Dome and Afas Live). There are also a few places to get some (fast) food or have a drink, though options remain rather limited.

Recently, a few new hotels have opened near the Amsterdam ArenA, which include a Hampton by Hilton, the futuristically shaped Fletcher Hotel, and the Jaz Hotel. If arriving by car, the road-side and affordable Bastion Deluxe Hotel is a decent option, though you do need to catch a metro to get to the arena. Click here for an overview of hotels near the Amsterdam ArenA.

Of course, most will prefer to stay closer to Amsterdam’s lively city centre.

Tickets for Ajax games can be bought online.

If tickets remain available, these can usually also be bought at the ticket windows of the Johan Cruijff ArenA on the day of the match, though recently Ajax have been selling out well in advance.

Expect to pay €25.00 for a seat behind the goal and between €30.00 and €50.00 for a seat at one of the sides for a regular match. Prices get increased for the games against Feyenoord and PSV.

Ajax occasionally require possession of an Ajax Club Card to buy match tickets, but most matches go on general sale. There is a separate ticket portal for foreigners to buy tickets.

The Johan Cruijff ArenA offers guided tours that include the press room, mixed zone, VIP areas, and dressing rooms. The tour lasts about 60 to 75 minutes and are in English and Dutch.

Tours run every half an hour on weekdays and every 20 minutes on the weekend. You can check the latest schedule here. On the weekend, it is also possible to follow a self-guided tour, which allows you to follow a route around the stadium at your own pace.

The tour costs €16.95. Bookings are not required, but can be made online.

Photos of the Johan Cruijff ArenA