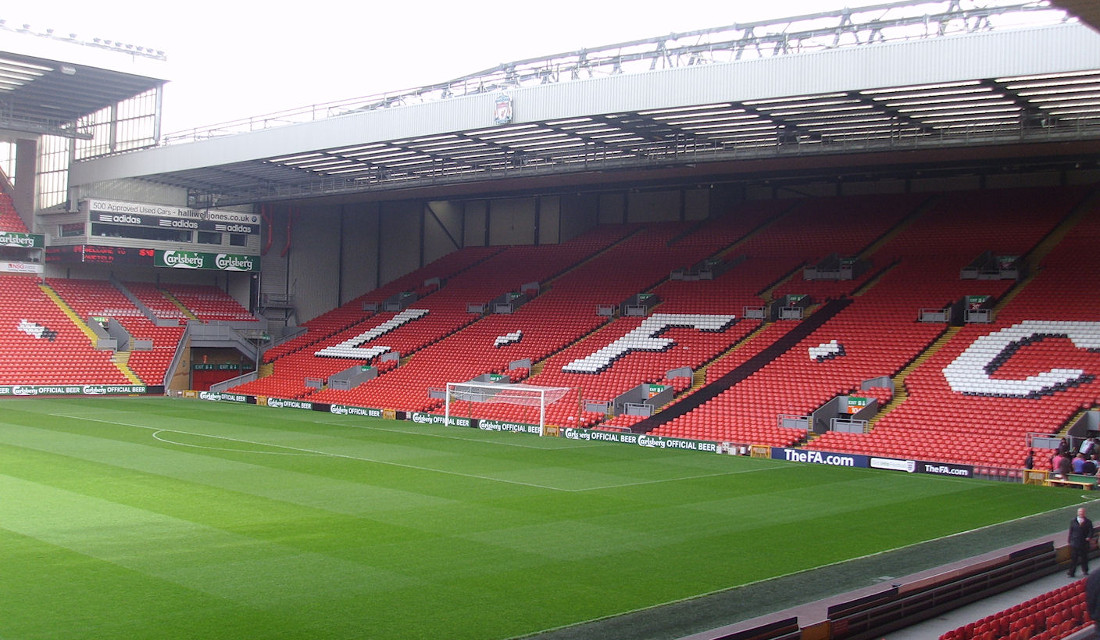 Anfield was built in 1884, but got initially rented by Everton FC. The first game at the ground, on the 28th of September 1884, saw Everton beat Earlstown 5-0.

In 1891, Everton moved out of Anfield after a dispute over the rent, and one year later newly-founded Liverpool moved in. Their first match at Anfield was a 7-1 win over Rotherham.

The ground remained more or less the same for the next two decades until the Kop got expanded in 1928. Once completed, it could hold about 30,000 fans.

Anfield set its record attendances in 1958 when 61,905 people attended a match between Liverpool and Wolverhampton Wanderers. Further improvements were made between 1963 and 1973, when the old Main Stand got demolished and replaced with a new one.

Anfield did not host any matches during the 1966 World Cup, which were instead played at neighbouring Goodison Park.

In the 1980s, a start was made to convert the stadium into an all-seater, and in 1982 the famous Shankly Gates were erected. The last significant changes to the stadium were made in the 1990s, first with the rebuilding of the two-tiered Centenary Stand, then with the conversion of the Kop into an all-seater stand, and finally in 1998 with the construction of a second tier on the Anfield Road Stand.

Anfield was one of the playing venues of the Euro 1996 tournament, during which it hosted three group matches and the quarter-final between France and the Netherlands (0-0).

In the late 2000s, Liverpool contemplated moving away from Anfield to a larger and more modern stadium, and even obtained planning permission for a new 60,000-seater stadium at nearby Stanley Park. However, insufficient funding delayed the plans, which were finally discarded in 2012 by the new owners of the club.

Instead, the ownership opted to redevelop and expand Anfield. The first phase involved the reconstruction of the Main Stand, which increased capacity with 8,500 seats to a total of 54,047. Works started in January 2015 and were completed right before the start of the 2016-17 season.

If there is sufficient demand, plans also include a possible expansion of the Anfield Road Stand, which would result in a final capacity of about 59,000 seats.

(photos of the present Anfield below)

How to get to Anfield

Anfield is located about 2 miles north of Liverpool city centre in the middle of the Anfield area. Just half a mile away, separated by Stanley Park, lies Goodison Park, home of Liverpool rivals Everton.

If coming by car from the M57 north, exit at junction 4 toward Liverpool/A580. Follow the A580 toward the city for almost 4 miles, and, after having passed Walton Hall Park on your right, turn left onto Queens Drive (A5058). After half a mile turn right at the traffic lights onto Utting Avenue. Continue until you see the ground on your right.

If arriving from the south or east, approach the city on the M62 and follow for A5058 Queens Drive. Stay on the A5058 for about 3 miles, and turn left at the traffic lights at Utting Avenue. Continue until you see the stadium on your right.

If using public transport, take bus 17 from Queens Square bus station, which lies almost opposite Liverpool Lime Street train station in Liverpool’s centre. Alternatively, one can take bus 26 or 27 from Paradise street, also in the centre, or bus 917 from St John’s Lane. All buses leave you directly at the ground.

Eat, drink, and sleep near Anfield

Anfield is located in Liverpool’s Anfield area, which used to be rather derelict but has somewhat regenerated in recent years. It is bordered on one side by Stanfield Park and by terraced housing on the other sides. There is little to see and do around the stadium, though there are a few pubs for pre-match drinking. Expect them to get crowded though.

Of course, there are plenty of eating and drinking options in Liverpool’s city centre. Most of the nightlife is situated south and west of Liverpool Lime Street station (e.g. Concert Square and Mathew Street) and around the Albert Dock.

If you plan to spend more time in Liverpool, it will likely be more convenient to pick a hotel closer to the city centre, where there are many options.

Tickets for Liverpool games can be bought online only.

Liverpool sell out all of their Premier League matches. Tickets for lower-profile matches do occasionally go on general sale, but it is advised to purchase them as soon as they do roughly 6 weeks before the game.

Note that during the redevelopment works on the Main Stand, tours are limited to the Centenary Stand and does not include the actual dressing rooms, players’ tunnel, and dugout.

Tours run every day of the week multiple times a day roughly between 10:00 am and 3:00 pm. Check online for an up-to-date schedule and availability.

Bookings can be made online. Walk-ups are allowed but subject to availability and it is therefore advised to book the tour in advance.