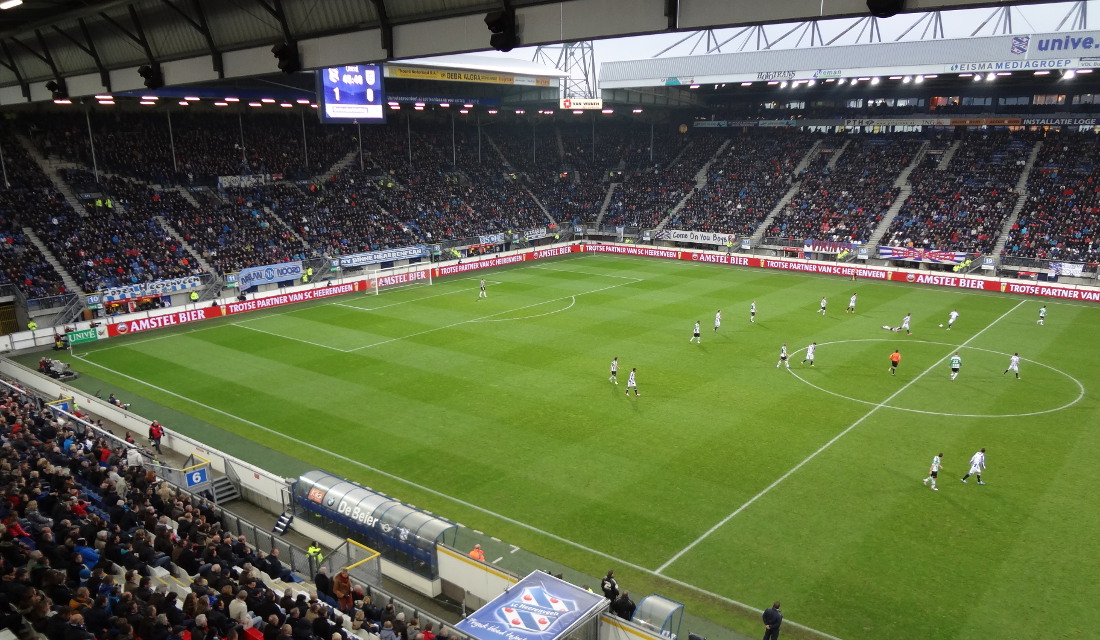 Abe Lenstra Stadion was one of the first newly-built modern stadiums in the Netherlands. Until the 1990s, Heerenveen had played at a ground with the same name elsewhere in the town, but it could not meet the increasing popularity of the club and the site of the ground would make good use for the expansion of a nearby hospital.

First plans for the construction of a new stadium were presented in 1992, and the project got approved in 1993. Shortly after construction started.

The design originally assumed four separate stands, but at the request of the city council the corners were closed.

Abe Lenstra Stadion officially opened on 20 August 1994 with a friendly between Heerenveen and PSV Eindhoven. The match was the debut of Brazilian Ronaldo (Luís Nazario de Lima) on European soil.

The stadium initially had 13,800 seats, which sold out consistently from its inauguration. Plans were therefore soon made for an expansion.

In a first step corporate facilities got improved, after which proper expansion works started in 2004. These involved the addition of extra rows of seating on top of three out of four stands. Work were gradually performed over the duration of a few years, and raised capacity to its current level.

Heerenveen have contemplated further expansions, possibly to a capacity to 44,000, however these plans have been shelved as attendances dropped off in recent years.

How to get to Abe Lenstra Stadion

Abe Lenstra Stadion is located slightly east of Heerenveen’s town centre and train station. The walk from the centre will take about 10 minutes and that of the train station 5 to 10 minutes more.

Alternatively, you can take bus 48 to Lemmer Lemsterpad. Get off at stop Abe Lenstra Boulevard. Buses leave two to three times an hour for the 7-minute journey.

Abe Lenstra Stadion lies adjacent to the A32 motorway. Either take exit 11 (from the south) or 12 (from the north), and follow the signs to the stadium. The stadium is clearly visible from the motorway.

Tickets for SC Heerenveen games can be bought online, or at the club shop at the stadium.

Heerenveen often require possession of a club card to be able to buy tickets so make sure to check the official website if there are any club card requirements for a particular match.

Tours require a booking of at least 8 participants. No individual options are currently available. Call +31 (0) 513 612 100 or email supportersservice@sc-heerenveen.nl for more information.