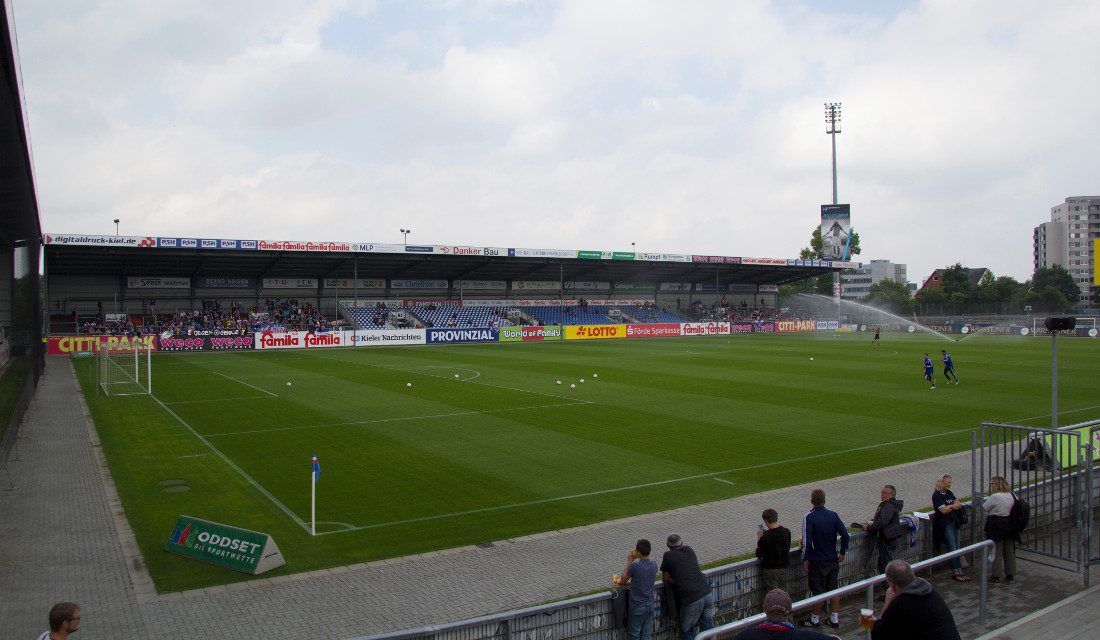 Holstein-Stadion, initially called Holsteinplatz, opened on 15 October 1911 with a friendly between FV Holstein and Preussen Berlin. It was, back then, merely a field with one wooden stand.

When after World War 1 newly formed KSV Holstein moved in, the ground soon proved too small and got extensively expanded in 1922 with a new stand and earth banks on the other sides. It could then hold about 8,000 spectators.

Over the next decades, the stadium got gradually further expanded and reached a capacity of 18,000 in the 1940s. During the War, the stadium got to a large part destroyed and it took until 1950 for it to be rebuilt when a new main stand opened. The ground could now hold 30,000 spectators.

One year later, the stadium’s record attendance was set when the stadium sold out with 30,000 fans when Holstein received HSV.

In the next decades, no further developments were made with the only noteworthy events being the installation of floodlights and the renaming of the stadium to Holstein-Stadion. In those years the club rarely attracted more than a few thousand spectators.

By the 1990s, the stadium slowly had fallen into disrepair, but while the possibilities for a redevelopment or move to a new stadium were explored, little action was taken. It took until 2005, when the German FA deemed the stadium unfit to host any matches, that the situation became urgent enough for action. Two new covered stands were built as a result, which opened in 2006.

Further improvements were made in the next years, and in 2017 the club announced plans to further expand the stadium with a new East Stand, which, when completed in 2018, should raise capacity to 15,000 places.

How to get to Holstein-Stadion

The stadium can be reached with bus 91, which departs from the main railway station or can be caught closer to the old town on Andreas-Gayk-Straße. The journey takes just under 20 minutes. Get off at stop Am Stadion.

Bus 91, however, only runs once every 30 minutes and has limited service in the off-peak hours, and therefore either bus 11, 501/502, or 900/901 can be more convenient. Buses also depart from the railway station. Get off at stop Hanssenstraße, from where it’s a small walk to the stadium.

Kiel, located in the far north of Germany, has an hourly direct train service to and from Hamburg. The journey takes about 1 hour 20 minutes.

Tickets for Holstein Kiel games can be bought online, by phone +49 1806-57002, at the Ticket Center at the Sparkassen-Arena-Kiel in central Kiel, or at any of the Eventim sales outlets in the Kiel region, including various other outlets in Kiel’s city centre.

If still available, tickets can also be bought at the stadium on the day of the match. Holstein rarely sold out in the lower leagues, but since their rise to the 2. Bundesliga may sell out the odd high-profile match so booking in advance is recommended.